THE OWNERS of a family farm have praised the firefighters who extinguished a massive blaze at one of their barns.

It broke out on Saturday night completely destroying the 20m by 20m building which housed hay, straw and farm machinery. 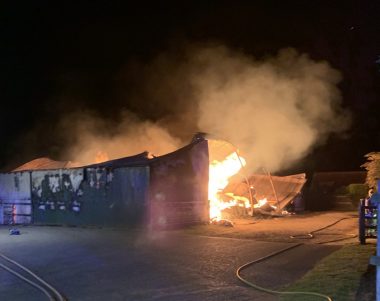 Marjorie Jarvis, 76, said it was the first time there had been a fire at Fockbury Farm in Dodford which was bought by her husband Bob’s dad in 1923 when he left the army after the First World War.

The arable farm is now run by their son Jonathan.

“I saw the flames coming out of the roof at 10pm – it was a massive shock.

“I called 999 but someone else had already called them.

“The first fire engine arrived in under five minutes – it was an amazing response.” 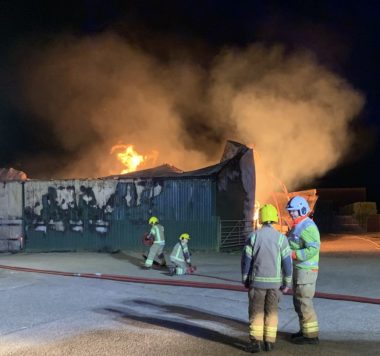 Seven fire crews in total – three from Redditch, two from Bromsgrove, one from Evesham and one from Droitwich – attended, using water jets and other hoses attached to hydrants to put out the blaze whilst simultaneously, damping down the surrounding barns and oil tanks so they did not ignite.

Marjorie added: “We are so grateful to the firefighters – they were so efficient and pleasant, they did a fantastic job.

“It could have been so much worse.”

After extinguishing the fire the crews monitored the area for the next 24 hours, checking ‘hot spots’ and doing further dampening down to ensure it would not start again.

Marjorie’s daughter Elaine Jarvis also put a thank you message on Facebook to the fire service. 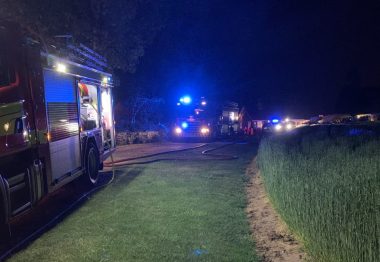 Marjorie said since the fire she had received so many offers of help from people living in the area.

“The community spirit has been absolutely wonderful.

“We have had lots of people calling texting and messaging us to see how we are and if we need anything.

“The phone has not stopped ringing – it has been overwhelming.”

The cause of the fire is still unknown but a group of seven youths were found sitting in the barn the week before and Bob had found a cigarette end there.

Sgt Lee Page confirmed police had stepped up patrols in the area and were speaking to the fire service about the incident.

He urged any witnesses or anyone with any information to call officers on 101.