QUESTIONS are being asked about Health Secretary and Bromsgrove MP Sajid Javid over an alleged perceived conflict of interest and an alleged breach of the Ministerial Code over shares he previously declared in an American company.

Mr Javid quit his role with the firm – reported to have paid £150,000-per-year – in June 2021 when he took up the post of Secretary of State for Health and Social Care. 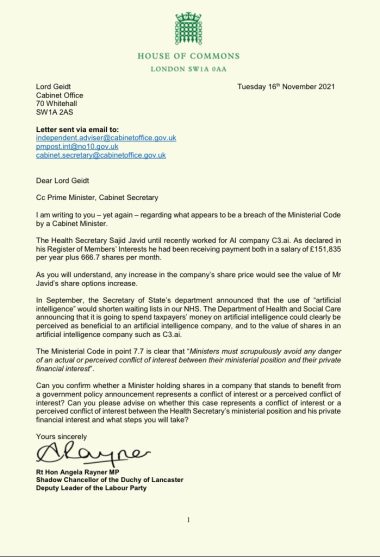 But Ms Rayner  is questioning whether he still has an ‘option for 666.7 common shares per month’ which, if correct, she feels breaches the Ministerial Code.

She also references in the letter an announcement made by Mr Javid on behalf of the Department of Health and Social Care in September where he spoke about the use of technology in the health service and ‘the use of AI to shorten waiting times for the NHS’.

Dr David Nicholl, who raised the issue with the Standard earlier this week, said: “This is a clear breach of the Ministerial code which I’ve been highlighting since his appointment and since Private Eye broke the story.

“Mr Javid’s answer raises even more questions, why did he not sell them immediately upon appointment.

The Standard contacted Mr Javid yesterday for a response and is awaiting a reply.