THIS production of the Herman/Stewart classic ‘Hello Dolly’ is my first review of Walsall Operatic Society (WOS) –  actually it is the first time I have seen them in action though their reputation precedes them.

It is worth pointing out that if it wasn’t for societies like WOS  then the theatre going public would not see these musical classics from the days of yore in their intended large cast versions – they are just too expensive for professional airings. We are in an era where most casts come in single figures.

It was then quite a treat to see the Wolverhampton Grand Theatre stage bristling with a multitudinous, brightly coloured costumed company as the curtain rose on the shows opening number ‘Call on Dolly’. 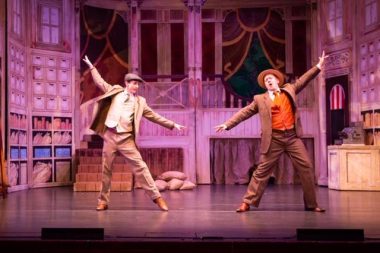 The strength of this company is undoubtedly in the vocals – in addition to all of the principals having excellent singing voices, the harmony work in the ensemble was quite outstanding.

The title role of Dolly – the matchmaking – card to suit every occasion extravert Dolly Gallagher Levi (to give her full name) is captured imaginatively by Vicki Hardy – she plays it with more lightness than brashness.

Craig Smith applies a generous dollop of gusto to his portrayal of Dolly’s foil and man she sets her sights on to marry – the wealthy and arrogant seed store owner Horace Vandergelder. 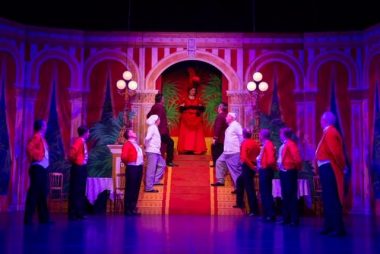 Alex Woolliscroft and Adam Gregory make for a good pair of likely lads as Barnaby Tucker and Cornelius Hackl, Vandergelder’s workers who hatch a plan to experience adventure outside of the tedium of life in the Seed Store.

Lizzie Buckingham cuts a deft figure as Milliner-in-Chief, Irene Molloy and Hannah Bird is delightful as her assistant. These are the lucky ladies the boys get to hook up with.

Eleanor Shephard brings the correct level of annoyingness to the non-stop wailing role of Ermengarde; Chris Room is Ambrose Kemper her long suffering boyfriend; Gill Westwood is deliciously outrageous as Mr. Vandergelder’s date at Harmonia Gardens, where Geoff Bird plays Rudolf Reisenweber  – the German maître d who seems to have got his accent at Eaton alongside Boris.

Sadly they are badly let down by an ill-conceived lighting plot which often has the cast at the back of the stage often in darkness whilst the empty front of the stage is lit, cues were either missed or late and just when the lights are nice and bright in several big numbers and the song reaches its peak they are for some reason best known to the designer plunged into gloom.

Likewise the radio mics need turning up several notches, most of the subtle intimate dialogue moments are inaudible – especially when the orchestra is playing who are by the way excellent and I am not for one minute suggesting they are too loud – the mics are too quiet.

There is no doubt that WOS is a talented bunch and I hope for their sakes the creative up their game to meet them before the run concludes.