‘AFTER the past year, people need cheering up and that’s what I think this album will de’ – they were the words of Roy Stride, the lead singer of Scouting For Girls on today’s release of ‘Easy Cover’.

Roy said: “The idea started about a decade ago – it was a drunken conversation at four in the morning after a gig when we were all listening to Phil Collins and singing along.

“It was suggested we do a covers album of 1980s classics called ‘Easy Cover’ (like the pun) but it was just a joke to start with.”

During lockdown, Roy started to perform and play around with a few 80s songs to keep his spirits up and it spiralled from there.

“When I started, I didn’t really think it was going to be an album but it just got bigger and bigger.”

Roy also found time to write some songs during lockdown and said he had enough material for another couple of albums.

“They can wait for another day – right now people need to be cheered up and listen to stuff that makes them happy and I think Easy Cover will do that.”

Among the songs making it on to the album are Everybody Wants to Rule the World, Girls Just Wanna Have Fun, I Wanna Dance with Somebody, The Whole of the Moon, The Look of Love, Easy Lover (obviously) and others.

There are also a couple of trademark catchy tunes written by the band, including ‘I wish It Was 1989’ and ‘Xmas in the 80s’ – two toe-tapping nostalgic tracks written during the dark days of the lockdown and remembering the brighter times the band members will be looking to help recreate on the tour.

When you hear Scouting For Girls, they sound more 90s than 80s, so why did they choose the songs they did – I put it to Roy.

“A few people have asked that – we’ve always love the 80s songs and the 90s too – that was happening while we were at school and if it wasn’t for Blur, Pulp and Oasis (and The Beatles via them) we wouldn’t be here now.

“It was definitely the bands from the 90s which inspired us to get into music.”

All the songs have that unmistakable and instantly recognisable sound.

“I have tried to sing differently and even had a go at some dance tunes but they just sounded weird – like Scouting For Girls trying to create dance music, which is what it was.

“We never take ourselves too seriously – I think that comes across in the music because people are always pointing out that sense of us having fun while we perform our music. 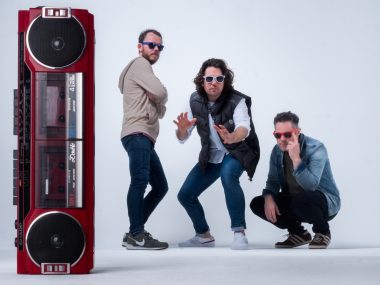 “I remember once during the Isle of Wight Festival I looked out before we went on and there were about 400 people stood there but then when the set kicked in more joined and there ended up being around 25,000 smiling faces.

“Everyone has always just wanted to be able to go out, have a great time and enjoy themselves – especially in the last 12 months – and that’s why we can’t wait to get the tour started.”

The band are due on tour throughout October and November with Cheltenham, Coventry, Wolverhampton, Derby and Leicester among the places they will be visiting in the Midlands.

Roy said: “I don’t think I have ever looked forward to a tour so much in my life as I have after such a horrible year.

“We’ll be playing all the big songs – a mix of our hits and some great covers and just generally having fun out there.

“When we visit each place, we tend to get there early and do all the sightseeing and touristy stuff, then we have a meal, do the show and have a few drinks and a party afterwards, then we get up the next day and do it all again.

“It’s amazing but we know it’s only for a few weeks then it’s back to washing the dishes and taking the kids to school.”

Roy added the band very much appreciated where they were and what they had the chance to do and wanted to take everyone with them.

“We have all been friends since school and just like to have a laugh, have fun and make music – that’s all we’ve ever wanted to do and every day we can’t believe we have that chance.”

The band will be enjoying every minute as their journey from forming at school to getting a record contract took ten years.

They burst onto the scene in 2007 with their self-titled album ‘Scouting For Girls’ and had single success with the ‘you can’t help but sing’ She’s So Lovely (number 7 in the UK), the equally catchy Elvis Ain’t Dead (UK no. 8) and Heartbeat (10 in the UK charts).

The Indie-pop trio grabbed that elusive number 1 in 2010 with ‘This Ain’t a Lovesong’ and the band have been producing an album every two to three years since their breakthrough.

Visit www.scoutingforgirls.com for more on the band, Easy Cover, the tour and more.

Gardening Time: Here’s how to help the bees all year round

Motoring: Ford’s KUGA is a loyal servant that aims to please its driver

9 expert predictions for high-tech homes of the future