‘Prism’ is Johnson’s first full-length play in over a decade and one he has also elected to direct. 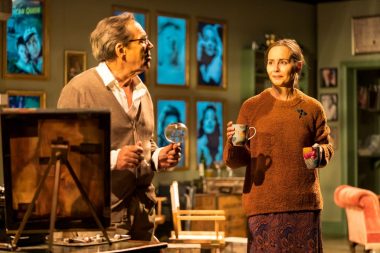 This powerful combination have a string of awards to their names, Johnson is almost as famous as a Broadway and West End director as he is a writer and Lindsay has given us some of the greatest TV and big screen comedic and classical offerings plus some sparkling musical theatre. With this thought in mind, I was perhaps expecting too much.

As with most of his plays ‘Prism’ concerns a unique person from show business history – in this case it is perhaps the greatest lighting cameramen and director of photography ever in the history of cinematography. 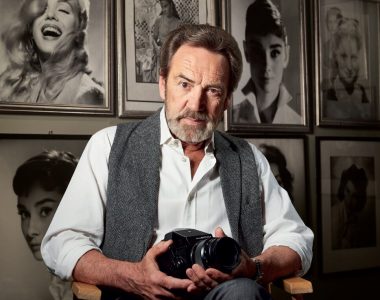 Jack Cardiff, who among a myriad of industry gongs, won Oscars for his legendary movies ‘Black Narcissus’ and ‘The Red Shoes’.

In the Cardiff role, Lindsay is all consuming and offers perhaps the greatest stage performance of his career.

He totally captures not just the talents of Cardiff but also his magnetism to women – to whom he often made love not just with the camera but in reality.

Though as Jack says, he wasn’t a kiss and tell kind of chap.

Lindsay also touches on Cardiff’s experimentation with prisms which he used to create unique screen textures and colours known affectionately as ‘Painting with Light’. 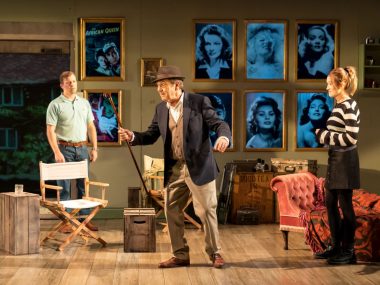 At the time we meet Cardiff he is in the grip of dementia and so his recollections are often the past merging into the present.

There are patches where we, the audience, share his confusion and I‘m not sure this is what the writer intends.

Cardiff has come to live with his son Mason – a capable performance from Oliver Hembrough – and his wife Nicola, an exquisite outing for Tara Fitzgerald.

Mason and Nicola live in Buckinghamshire where they have converted their garage into a den of memorabilia for Cardiff to relax and relive and perhaps write his autobiography, which Mason has, designs on publishing. 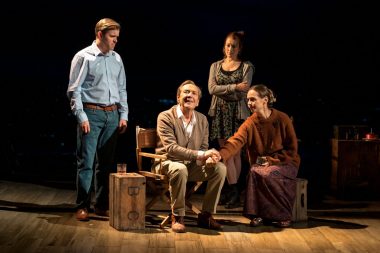 Victoria Blunt completes this four-hander as Lucy, a carer-come-typist who falls under the charm of the ailing maestro.

The opening where we just see feet under the garage door as Cardiff demonstrates screen sizes via raising the Cinerama shaped garage door up and down seems to go on interminably before it actually rises fully and the action truly begins.

In truth I found act one in total a tad ponderous whilst the format of seeing life through Cardiff’s Alzheimer-fuelled eyes is established.

Lindsay, mostly rises above the clunkiness with some much-needed and obvious humour as release buttons.

The act does end on a magical note as the garage walls and roof fly out and we are transported deep into the heat of the sweltering African jungle.

I found act two far more satisfying from the moment it opens on the making of ‘The African Queen’ where Mason is Humphrey Bogart and Nicola is Katherine Hepburn – both put in fine cameos. Jack Cardiff is his young self and we see him in his prime.

As Cardiff’s dementia gathers pace and his grip on reality decreases the play becomes more like watching a film being made than a play being acted.

It culminates in a quite wondrous kaleidoscopic view of his final vision seen through his personal prism.

Heroes and masters of their craft indeed are Johnson and Lindsay – maybe I’m doing them in a disservice when I say I found this Prism a ‘flawed masterpiece’.

Like Jack Cardiff’s mind flitting in and out of his personal reality I too had moments of lost concentration – then again there were times when I felt I was witnessing theatrical magic.