Do you remember these Bromsgrove Christmas songs?

OVER the years, Bromsgrove residents have written and produced seasonal songs which they hoped would climb the charts towards that coveted Christmas number one slot.

Among them were the catchy ‘All the Broken Toys at Christmas’ by Batteries Not Included in 2012 and the nostalgic ‘Christmas in Our Town’ by Vintage 12 in 2014.

Batteries Not Included – ‘All the Broken Toys at Christmas’

Batteries Not Included was made up with NEW College (now HOW College) students and tutors who produced the song.

All the Broken Toys at Christmas was created to raise funds for Sense and was given a 50-1 chance by William Hill of getting the Christmas number one at the time.

James Arthur and The Justice Collective’s cover of He Ain’t Heavy, He’s My Brother – in aid of the Hillsborough tragedy – which took the top spot on December 25.

It was given plenty of airplay across the West Midlands and peaked at number 47 on the Amazon MP3 Christmas download chart, finishing  ahead of festive classic ‘Driving home for Christmas’ by Chris Rea.

It also had a pretty cool video (below) which showed all those toys mentioned in the song which many of us remember from our childhoods.

Vintage 12 – It’s Christmas in Our Town

Bromsgrove man Phil Haynes was inspired to write his tune by Christmas classics from Midlands rockers Slade and Wizzard.

Phil teamed up with Niven Smith to form Vintage 12 for the charity single which raised funds for Libby Mae’s Little Angels. 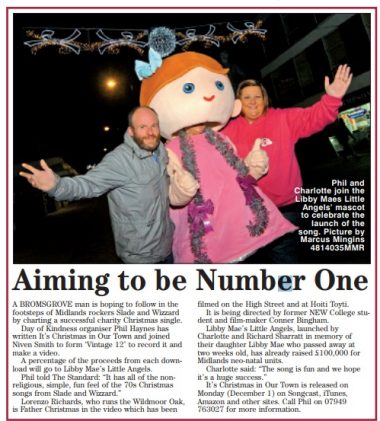 A percentage of the sales went to the charity.

The video was filmed in Bromsgrove and featured award-winning chef Lorenzo Richards, who runs the Wildmoor Oak, as Father Christmas.

Some of the film was shot in the High Street, indluding toy shop Hoiti Toyti and it was directed  by former NEW College student

The number one that year was won by the X-Factor’s Ben Haenow with ‘Something I Need’.

Christmas in Our Town is available on Songcast, iTunes and other platforms.

The video is below –

Have you created a Christmas song? Email the details and video links to editor@bromsgrovestandard.co.uk