CO-CREATED by talented duo, Robin French, who is also the writer, and Alex Brown who is also the director, this in-house production explores the power of music against racism on the streets of Birmingham and Coventry. 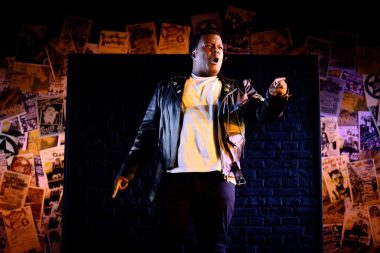 It is set back in the bleak social and economic years of the late 1970s – in particular the joining together of  punk, reggae and 2Tone – ‘Rebel Music’.

It is a three-hander from a very talented trio –

Lauren Foster brings masses of warmth, wonder and disillusionment to Denise, a mixed race girl who pines from her missing Jamaican dad.

And Nathan Queeley-Dennis multi-tasks splendidly as a variety of character but mainly as Andrew. 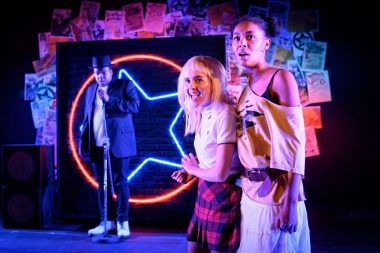 There is some clever stuff and moving moments – Andrew’s lengthy monologue at the end of act one is a theatrical joy and the Sparkhill standoff between BNP and the anti-fascist alliance blood-stirring.

Whilst Rebel Music has much going for it, it is also work in progress.

It’s not as if it leaves questions unanswered – it’s more that it goes off down to many blind alleys, perhaps making this production a workshop on the road to a more rounded script. 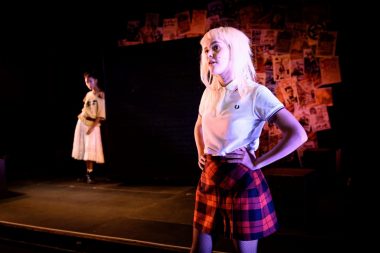 The storyline needs more joining up of the personal journeys whilst the political ‘then and now link’ feels a little tenuous.

After it’s run at the REP it is touring around Birmingham and Coventry at various unusual locations including libraries where I am sure it will continue to evolve.

Music is a timeless and all-powerful rallying call  – the beat goes on.

Rebel music runs at The Door at the Birmingham Rep until next Saturday, October 5.