A COUPLE of years ago I saw award-winning choreographer Rosie Kay’s production of ‘5 Soldiers’ at a special performance staged in an army drill hall.

This unique take on frontline military life, given its World premiere at the Birmingham Hippodrome before its tour, was hot from being a huge success at the Edinburgh Festival.

It was a riveting piece of dance theatre where we were so close to the action that you could see the whites of the actor’s eyes and smell the sweat of the dance. 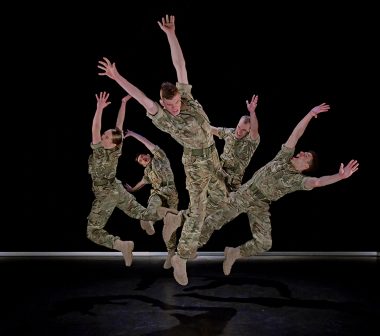 The stage is black as the curtain rises – a loud explosion and protracted light-burst in the sky silhouettes a soldier who is struck by an incoming rocket or artillery blast. His body contorts in a macabre death-dance as he writhes in agony.

From this dramatic opening, 10 Soldiers takes us on a journey of change as we follow youngsters from different civilian backgrounds transforming into soldiers. We share their dreams, camaraderie, pain, fears, triumphs and the physical and mental impact of that journey when they reach the end.

The magnificent ’10 Soldiers’ comprise of Olly Bell, Luke Bradshaw, Harriet Ellis, Emma Houston. Alan Hunte, Josh Hutchby, Kevin Memeti, Jonathan Mewett, Gareth Mole James Rosenthal and Akshay Sharma – I mention them all as they are superb, acting as one awesome, flawless well-trained unit. They are simply the SAS of dance giving us an evening to long remember. 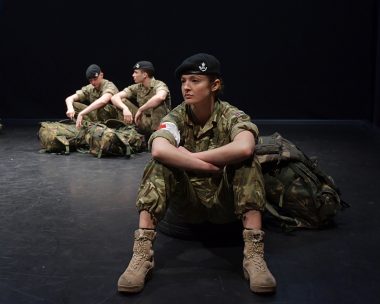 This ‘masterpiece’ has been supported and nurtured by Hippodrome CEO Fiona Allan (who’s mission seems to be to build a Birmingham Barbican creative hub of excellence), and the British Army which has given Rosie Kay unprecedented access to interviewing post Iraq veterans and pre-deployment Afghanistan soldiers in her creative research.

The video designs by Louis Price add so much – from giving us backgrounds of barren deserts and mountains to the inside of Chinook helicopters and the music composed and arranged by Annie Mahtani work in unison.

10 Soldier sends the audience out feeling grateful for the young men and women that dedicate their lives to keeping us safe as well as witnessing an adrenaline-fuelled  very brave piece of dance drama.

It’s off on a national then international tour – try and catch it somewhere – its well worth travelling for.