MIKE TAYLOR believes Bromsgrove Sporting have every chance to getting into the promotion play-offs this season, despite competing in their first ever campaign in the Southern League Premier Division.

The Rouslers moved into third place in the table – the highest in the club’s history – after Taylor’s 16th goal in 12 matches helped secure a 4-1 win at home to Kings Langley on Tuesday.

Tamworth sit eight points clear in top spot, with two games in hand, are the clear favourites but striker Taylor says Sporting should relish every single challenge they face. Brendan Kelly’s side head to Taylor’s old club Stratford Town on Saturday (3pm), looking to continue a run which had reaped four wins from the last six in the league. 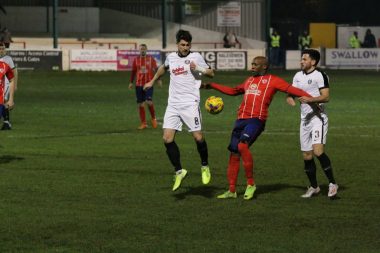 “I’ve been playing in this league for four years now and this is the most even it has ever been,” said the 31-year-old, who joined Sporting from Stourbridge in September.

“Apart from Tamworth, no-one is running away with it so I think that second promotion place is definitely up for grabs. There’s nothing to fear in this league.

“I think this club has got a big future. We want to get into the play-offs this season. That would be great. But we’re building long term too. If we don’t do it this season, we can go all the way next season.

“It’s the small details that make the biggest difference, how to manage the game, how to be nasty and make it difficult. A lot of the lads have come through the levels.

“There’s only a handful of us who have played in the Premier Division so we are learning all the time.”

Taylor joked he had no choice but to join Sporting once director of football Graham Scott suggested a move.

Scott had signed him as teenager back with Earlswood Town, where Taylor made his name after smashing 40 goals in a season.

“My first manager at Earlswood was Graham Scott and he’s here at Bromsgrove so when he called me it was a no-brainer,” the forward added. “He told me I had no choice and I’m glad I made the decision to come.

“Bren was after me three or four times since the summer.

“I’m enjoying my football. I’m a big confidence player. If I’m not happy, I go into my shell.”

His goals tally is testament to that positivity but the former Worcester City, Redditch and Tamworth player admits the total could have been greater.

“It could have been more. I’m my own biggest critic,” he added. “On Saturday against Royston I had two good chances from headers and should have scored and on Saturday night I was just kicking myself for not taking them.

“This team just fits me, how they play, how intense they play, it suits me my game a lot. You can see the quality out on the pitch. Luckily I’ve been in the right place at the right time in most of the matches to get a goal and long may it continue.”