Roulsers fitrst-team boss Kelly was a surprise guest at the presentation evening of the Under-7s and Under-11s teams at the Rubery British Legion.

“The evening was a great success and around 100 people attended to celebrate the youngsters’ achievements,” said Hare. 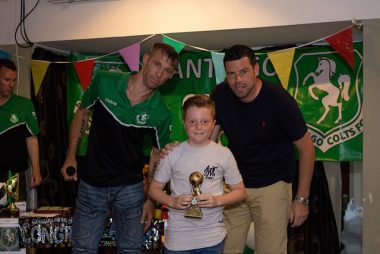 Carl-Shipway and Brendan Kelly presenti an award to Dan Taggart.

“A big thank-you from all of us at the Under-7s and 11s; from coaches, parents, to the young players, for Bren taking the time to come and support such a fantastic evening.

“It was a fantastic show of how the two clubs have already shown they are working together to create the future of youth football in the Bromsgrove area.”

The award winners were as follows:

Kelly: Trio will give us strength in depth