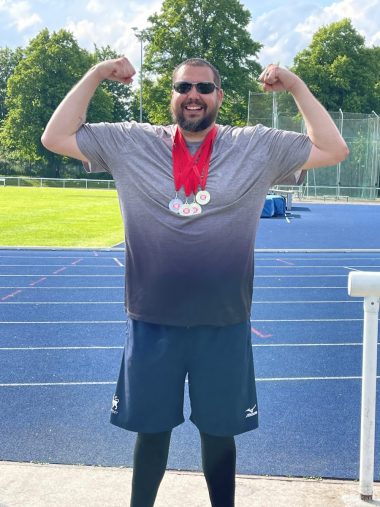 Sam Cater had every reason to be all smiles after his medal haul in Nuneaton.

IT WAS a weekend to remember for Bromsgrove and Redditch Athletics Club’s Sam Cater at the recent Midland Masters Track and Field Championships, after achieving four podium places to add to the 12 total medals amassed by his teammates.

The Pingles Stadium in Nuneaton has seen plenty of silverware secured in recent weeks, but B&RAC’s athletes perhaps gave one of the best accounts seen so far this year after ending the afternoon with five golds in all.

One of the rare participants not to secure a medal, Deb Ricci put on a brave showing on her first appearance back from injury to finish the W50 100m in 15.88 seconds.

Bromsgrove & Redditch’s maiden gold of the day was brought home thanks to Julie Wakelam, who went above and beyond with her season-best long jump of 3.37m.

The W60 athlete was not done just there however, picking up a silver in the hammer event with a stunning 28.49m throw, before completing a hat-trick of podium places with a bronze in the javelin – achieving a distance of 21.08m.

If Wakelam’s showing was impressive, then Cater’s afternoon was certainly one to remember.

Participating in four events, the M35 athlete finished no lower than second to become a mainstay on the podium – ending up with three gold medals around his neck.

In his first event to produce a first place, Cater achieved a hammer throw of 32.17 metres – his best distance this term – before a 9.43 metre shot put throw earned a silver medal.

Not willing to accept second best again, the B&RAC athlete then ended the afternoon in style, throwing a 39.19m in the javelin and a season-best 27.22m in the discus to complete a hat-trick of golds.

FOOTBALL – Versatility will be key for new-look Rouslers

My best years will be with the Pears promises Hose