CATSHILL’S under-12 girls team (now under-13’s) celebrated a quadruple last season and will hope to win more silverware next term having moved into the Central Warwickshire League.

The girls began a tough 2021/22 season in indifferent form, picking up two wins from their opening five matches, whilst goalkeeper Mia Welch suffered a broken arm in victory against local rivals Bournville.

Welch admirably played through the pain barrier and made a number of crucial saves in the 4-3 success, with the extent of her injury not diagnosed until after the game had finished.

However, a 5-2 defeat away at Halas Hawks, for which Catshill only had eight fit players, proved the turning point.

Catshill’s girls embarked on a sensational run of form that saw them win 11 of their next 12 competitive matches as they stormed to the top of the table.

This run included a notable 7-1 home win against Sedgley and Gornal United and 6-1 hammering of Halas Hawks in the return league fixture.

Despite exiting the cup in the second round after a 2-1 defeat to Wrens Nest, Catshill continued their momentum in the league to win their next four league matches, scoring 16 goals and conceding only two in the process.

And the title race would be decided in Catshill’s final game of the season as they played host to Wrens Nest who were five points behind them in the table with two games in hand.

Catshill would go on to clinch the Stourbridge and District Girls Youth League Division One title with a hard-fought 2-1 win. 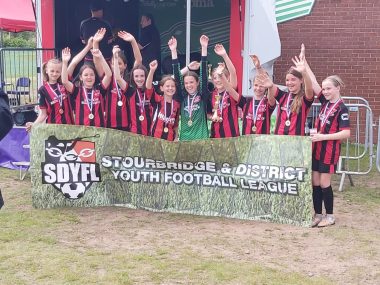 Keeper Mia was ably supported by defenders Amelia, Zariya and Phoebe with Skye, Ruby, Darcie and Bella in midfield, Chloe, Jessica and Annabelle out wide and the league’s top scorer, with 32 goals, Immy up front.

The success did not end there for Catshill as the girls won the Stourbridge and District tournament hosted by Kewford Eagles.

Catshill won all five of their matches at the tournament, without conceding a single goal, to triumph over 15 other sides made up of teams from division one and two.

The girls won their third trophy at Inkberrow’s six-a-side tournament with the squad split into two separate teams.

Catshill’s yellow team secured their place in the final, after a nail-biting wait, having won their last group game 5-0 whilst the red team just missed out despite playing extremely well.

And the yellow team triumphed 2-0 against a strong Inkberrow side in the final to clinch their third trophy in the 2021/22 season.

The girls finished the season with a trip to Hampshire, with around 75 girls on the coach, as they travelled to their weekend base at Avon Tyrrell Youth Activity Centre.

In their first team building trip away since Covid, the girls had a wonderful time taking part in challenges that included raft building and other outdoor activities.

They thrashed Portsmouth under-12’s 10-0 in a friendly before competing at the Hampshire six-a-side tournament as the yellow’s won their league whilst the reds finished as runners-up in their league – a commendable effort in 32 degree heat.

This meant a fourth trophy for Catshill and a remarkable quadruple having only failed to win one competition over the course of the season. 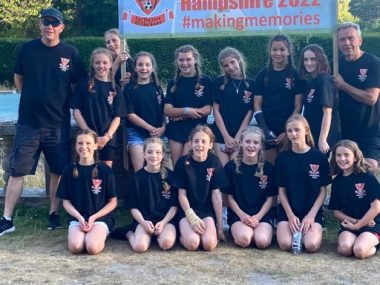 The girls have now moved into the under-13 age bracket and will play in the Central Warwickshire Premier League next season with highly anticipated matches against Coventry City girls, Solihull Moors and Stratford Town to look forward to.

Catshill have added Izzy Taylor to their squad ahead of the new season with the majority of the side having played together through the age groups since under-eight’s.

Catshill girls operate a wildcats centre and have 10 teams across the various age groups and around 150 girls playing and training either at the academy or in the different teams.

The whole club is run by volunteers and would not be able to function without the hard work of Clare Seagar, who was recently crowned FA county volunteer of the year, and the rest of the fantastic team of volunteer coaches.

Catshill is now one of the biggest grassroots girls football club’s in the county and is going from strength to strength.

The academy welcome girls of any ability from age five to 11-years-old and want to get as many girls as possible playing football, keeping fit, making friends and making memories.

And some of the girls, at different ages, have taken part in county trials with the future extremely bright for the girls game.

FOOTBALL – Versatility will be key for new-look Rouslers

My best years will be with the Pears promises Hose