BROMSGROVE Darts League honoured former chairman Brian Tustin for more than 50 years service with a commemorative trophy and have renamed the league shield in his honour.

Tustin has been involved with the league since the 1960’s and has held positions including chairman, secretary and treasurer – having captained several teams as a player in the Bromsgrove district.

And the 84-year-old decided to step down from the latter position at the end of last season in May earlier this year only for Covid restrictions to prevent the club from honouring Tustin’s service.

However, the league’s committee came together to arrange a surprise celebration for Tustin at Catshill Social Club last week.

League chairman Darren Willetts presented him with a specially engraved trophy before Match Secretary Will Brotherhood announced the league shield would be renamed in Tustin’s honour as the Brian Tustin League Shield. 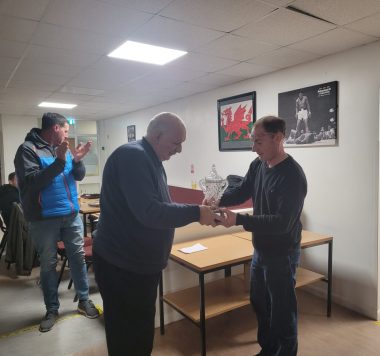 Tustin said: “I was surprised – I didn’t know anything about it – all the time I’ve been serving on the committee nobody has been presented with anything like this.

“I’m honoured to have the league named after me – I’ve been in Catshill all my life – nobody else wanted the job and that’s what I’ve been doing all this time for well over 50 years.

“My fondest memories are from when I was captain of several teams in the district – pubs and clubs – Catshill, Turks Head, Blackwell, Lickey End, Fairfield Villa FC and Bewell Head amongst others.

“I just love doing it – I used to do all the fixtures and the results – my eldest two sons play darts as well, the housework will keep me busy now!

“They’ve got a good committee now – I know it’s in good hands – they’ll carry it on.”

The league also presented trophies won from the 2019/20 winter league to the respective teams with the Crown Inn claiming the coveted League Shield.

And the Crown Inn currently top the Division One standings for this year’s edition – at the midway point of the season – whilst Studley CC lead the way in Division Two.