It came just after a week after they sealed the Mercian League title.

Cobras started quickly and strong, determined to take control of the match.

They used the wide areas well, creating plenty of space in the centre, racing into a 3-0 lead.

Worcester clawed one back but the Cobras added another to make it 4-1 at half-time.

The weather, in the heat of the day meant it was a tough task to keep the intensity at high levels for both teams but in the second half, the Cobras added a fifth. 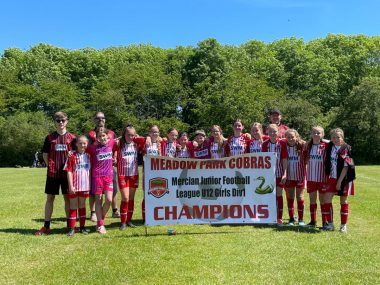 Great teamwork ensured more chances and shots on target for the Cobras in the closing stages, but a string of superb saves from the Worcester City goalkeeper meant it ended 5-1.

Cobras’ defenders were also praised for a very assured display in the heat and the girls celebrated as they lifted the trophy.

Cobras coach Mark Fortner said: “All of the Meadow Park Cobras coaching team and parents are extremely proud of these girls and what they have accomplished in the league and winning the cup today.

“They are a fantastic, determined team of girls who have achieved so much this season.

“Congratulations to all of you and well done.”