TWO young dancers from Bromsgrove are through to the final of a national competition after wowing judges at the regional stage.

Kaitlyn O’Brien, 11, and Ella Smith, nine, who both attend Spirals Dance and Performance Academy and St John’s Middle School, won a talent show in April in Torquay whilst on holiday at a Parkdean site.

Their victory qualified them for the regional finals last weekend and, after triumphing there, they will now contest the national crown in Skegness on November 8. 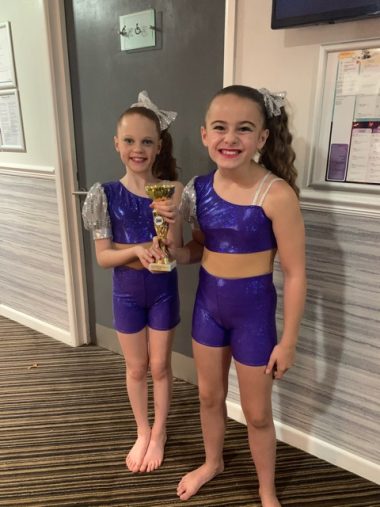 Becky O’Brien, Kaitlyn’s mum, said: “They have done fantastically well and we’re all so proud of them for putting Bromsgrove on the map.

“Whenever they are asked where they are from and they tell them, a lot of people say they don’t know where it is – so hopefully they can help change that.”

Ella’s mum Vicky Smith said: “We were so chuffed – we went on holiday in April and didn’t even know there was a competition.

“They had already rehearsed the routine their dance teacher Helen had taught them so thought they would give it a go in the contest.”

The mums had to go and find them a matching outfit and then the families had to leave Torquay in the early hours the next day to get to another competition for their dance school.

“We’ve got our fingers crossed for the national final,” added Becky.