A PUPIL at Winterfold House School was over-the-moon after winning a competition to become ‘editor of the week’ at So Beano.

Year three pupil Swaran Guru received an email from Beano headquarters confirming his position after he sent in a joke, together with a photo of himself in his school uniform.

Beano then sent Swaran a brief of the So Beano comic so he could choose the week’s competition winners and the best jokes to put in. 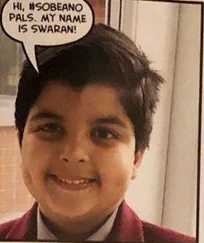 Swaran also asked its illustrator to draw a picture of him in his Aston Villa football kit.

Swaran and his family were sworn to secrecy before the issue was published on January 23.

A spokesperson for Winterfold School said: “Swaran feels very privileged to have been chose to be editor of the longest running British children’s comic magazines.”