Residents interested in the application spilled out from the council chamber and into the corridors.

They watched the debate unfold on TV monitors.

Councillors debated for more than three hours before the proposals were finally deferred for a later date.

This was despite officers at Bromsgrove District Council recommending the application for approval.

Campaigners also described plans for a new roundabout at the Fox Lane and Rock Hill junction – part of the developers promised £6.7million highways plan – as ‘inadequate’.

A spokesperson from community action group Whitford Vale Voice said: “After three hours the councillors, recognising the rafts of missing information and concerns, deferred the application for more information.

“The devil is in the detail and that’s why the developers have held it back.”

The group has set up a petition to highlight Bromsgrove’s need for a Western Relief Road to tackle congestion, air pollution and help the local economy.

“The current development proposals to the West were only put on the agenda in 2004 on the basis our town would get a new relief road.

“Now we risk losing this opportunity forever with Worcestershire Highways claiming it’s not needed and that the roads will be fine with just a few junction improvements and investment on the A38.

“What about the traffic through the town?”

The main site proposes 490 properties, a shop, new access roads, public open space and landscaping and the second site would see the Greyhound Inn pub bulldozed to make way for 15 homes and a new roundabout. 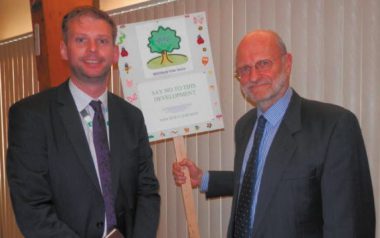 Coun Luke Mallett, who has also campaigned for the Western Relief Road, said: “The planning committee made the right decision to defer the application.

“It has more holes in it than a block of Swiss cheese.

“Developers failed to demonstrate that their junctions were even safe, let alone effective in reducing traffic congestion.

“To tour a series of unproven concepts as being a full solution is an insult to long suffering residents.

“Roads aside, more clarity is needed on the impact it will have on schools and health services too.”

Coun Mallett added that the last time the application was refused the developers and Highways said that a roundabout would not work, but now say the opposite.