STAFF at Bromsgrove School marked the 80th anniversary of its wartime bond with Llanwrtyd Wells by cycling hundreds of miles.

The school was evacuated to the Welsh town after its buildings had been requisitioned by the Ministry of War. 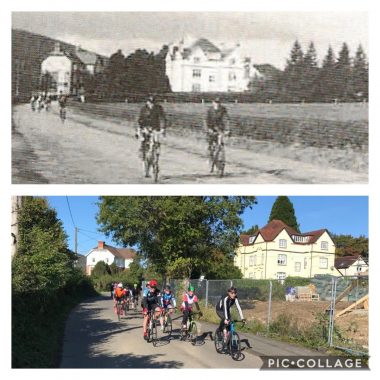 It was here the Junior School – now known as Bromsgrove Prep – was born.

Fourteen staff members decided to participate in the gruelling cycle to commemorate 80 years since the school’s founding – which now has more than 500 pupils.

Four of those riders completed a staggering 180 mile round trip.

Organiser Gareth Jones, the Prep School’s head of boys’ PE, said: “To cycle from where we were based in Llanwrtyd Wells back to Bromsgrove was a symbolic thing to do.

“I first thought about the idea during lockdown as it was reported that 1.3million people bought bikes.

“Cycling through the countryside either side of the border was beautiful and it all ran very smoothly.”

There were a couple of stops on route – firstly at the picturesque town of Hay-on-Wye and secondly at Bishop’s Froome which preceded the highest and longest climb of the journey.

Mr Jones added: “A great day was had by all.”