A MARRIED couple from Bromsgrove who have formed a wheelchair basket club are inviting aspiring players to join them, writes Ryan Smith.

Birmingham Phoenix was started by Julia Smith and her husband Rob in August to enable players of all ages and abilities to take part.

And the club has had an impressive start to the season, winning their fist six games in the British Wheelchair Basketball Third Division Central.

The club trains every Tuesday at Bishop Challoner Sports Centre in Kings Heath from 6pm to 8pm. 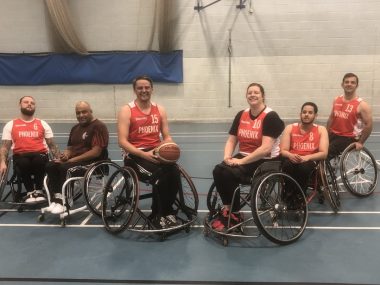 Julia originally got into the sport in 2003, setting up the Birmingham Black Cats to provide her students at a special needs school with an after school activity.

Her husband Rob joined a year later and the club ran for 14 years before disbanding in 2017.

Rob Smith said: “We disbanded our first club a few years ago with many of our players retiring, but myself and Julia started getting calls a few months after with people asking if we can start a new team up.

“Once we had a new treasurer and safeguarding team we started to set about our aim of how to get promoted to the second division with our new generation of players.

“We are really pleased with how things are going ad hopefully more members of the community can join us.”