POLICE cars across the West Mercia and Warwickshire force areas will feature poppy logos on their bonnets ahead of Remembrance Sunday and Armistice Day which this year marks the centenary of the end of the First World War.

Sgt Lee Baker who piloted the idea in Bromsgrove last year said the it went down so well and he received such good feedback that he just had to roll it out across the alliance this time around.

And the company he has bought 400 of the poppies from is giving a percentage of the revenue generated to the Royal British Legion’s Poppy Appeal.

Sgt Baker told The Standard: “Last year we just did it in Bromsgrove as we did not have a lot of time to get it done.

“I said if it did well and got a good response I would try and roll it out and I’m pleased to say that, after agreement from the two Chiefs, this year poppies will be on vehicles all over West Mercia, Warwickshire, Shropshire and Herefordshire.”

He added he had also spoken to people he knew from other emergency services who were also interested in getting the poppies for their vehicles in the run up to November 11.

“I have been in contact with the Royal British Legion and suggested they make the poppy transfers for vehicles next year and then more of the profits raised will go to the charity.” 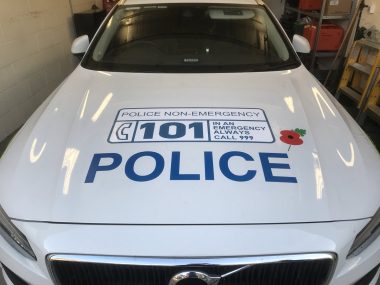 “The annual Remembrance services we have are among the most important parts of our national calendar and to have poppies on our police cars is a great idea.

“My congratulations go to Sgt Lee Baker for his achievement in getting the idea rolled out across the force areas.

“It’s a great example for other police forces to follow.”