WEST Mercia and West Midlands Police are clamping down on the illegal use of e-scooters.

According to the law, e-scooters are illegal for public use on roads, pavements, in cycle lanes and in pedestrian-only areas – with the exception of Birmingham and Redditch which are taking part in the Government trial. In the borough you can only use the official licensed ‘for hire’ scooters and private e-scooters cannot be used.

E-scooters are currently classed as ‘Powered transporters’ by the Government and fall under the same laws and regulations that apply to all motor vehicles in terms of requiring insurance, tax, MOT, licence and registration.

There is no mechanism in place at the moment to obtain any of these for e scooters so as this requirement can’t be met their use in public areas is illegal.

As they fall under the same laws as motor vehicles, anyone found using them in public areas risks having the e scooter seized.

Supt Mel Crowther said: “We are aware that national trials for e scooter use are taking place across the UK, but until these trials are complete and legislation is in place it remains an offence for private e scooters to be used on public roads.

“As a police force we have to enforce the current legislation that is in place which prohibits their use in public areas. It is our job to keep all road users safe so anyone found using an e scooter on public roads risks having this seized by police.” 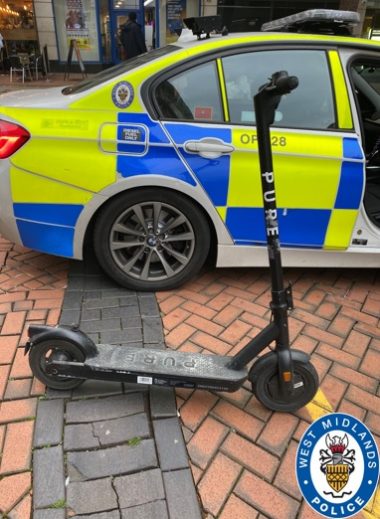 In the West Midlands force area, dedicated patrols will be carried out at towns and cities throughout June – those caught on a private e-scooter will have it seized and riders using the hired legal public vehicles will have their accounts suspended.

Since June 1, West Midlands Police has seized 10 scooters across the force area and have issued three warnings to riders of VOI scooters which include emails to the company to request either a ban or a warning on their accounts.

Sgt Jon Butler said: “We know there are concerns across our communities around the use of e-scooters.

“If they are used correctly – and in accordance with the rules – they can be a convenient and greener way of travel.”

He added the VOI scheme –- being trialled in Coventry, Birmingham and Sandwell – ensured there was an alternative and more environmentally-friendly way to get around but the scooters could be extremely dangerous if ridden illegally or in heavily pedestrianised areas.

Penalties can also include up to six penalty points on driving licences and fines of £300.

E-scooters are legally available to purchase but it is currently against the law to ride a privately-owned one in any public place in the UK, including roads, pavements, parks, in town centres and on canal towpaths.

They can only be used on private land, with the land-owner’s permission.

The hired scooters can be ridden in the same areas where bikes are allowed, such as on roads and cycle lanes. They cannot be ridden on pavements.

Visit the www.voiscooters.com for more information about the trial and legal use of e-scooters.