'We're over the moon!' - Rubery family reunited with greyhound Daisy who has been missing for 18 days

A RUBERY family are ‘over the moon’ after being reunited with their greyhound Daisy who had been missing for 18 days.

The six-year-old dog had escaped through the front door when owner Louise O’Brien went to collect a delivery on June 11.

There had been sightings of Daisy in the local area but she had not been recaptured until earlier today when she was found by 17-year-old Eleanor Grosvenor.

She was located by the quarry. 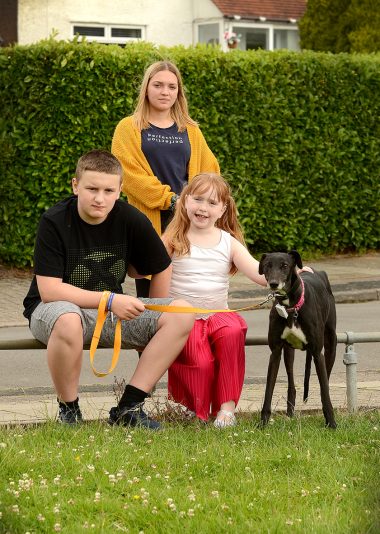 Louise said: “We are all absolutely over the moon – I couldn’t believe she had been found.

“I can’t thank them enough.

“I had imagined this moment in my mind so much since she went missing but it was even better than I ever thought it would be.

“She was so thin and tired – she could barely walk and her collar was hanging off her neck like a hula hoop.”

Louise added it was a shock when she ran off on that day as she usually always stayed in her own little corner.

Daisy has an inseparable bond with Louise’s 14-year-old son Harvey who is autistic and she was also missed by daughter Poppy.

The story was shared extensively across social media and was featured the Standard’s website last week.

“I want to say a big thank you to everyone who shared the appeal and helped find her.

“So many people came up to me in Rubery and asked if we had found her yet – it has been so overwhelming and has restored my faith in people.”

And as for Daisy’s reaction, Louise said: “She looked at us as if to say ‘oh it’s you’ before trotting off to her bed as if she’d never been away.”

Daisy is now getting some much-needed rest and recuperation after her adventure.