A BROMSGROVE-born digital artist who uses innovative work to raise environmental awareness has been chosen by The National Lottery to star in a special feature video.

The Air of the Anthropocene project is spearheaded by Robin Price who was hand-picked to film an educational deep-dive video for its work using an LED light painter and a long exposure photograph to reveal levels of pollution.

Robin appears in one of two in-depth feature videos telling the stories of environmentally-savvy National Lottery-funded charities in light of startling new research. 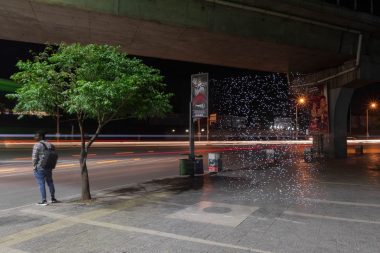 A survey showed 70 per cent of people feel they are not doing enough to save the planet and 73 per cent believe they have used more electricity during the pandemic. A third also admit to having the heating on more.

But almost half still feel the world will be a greener place for future generations, with many admitting they will change their habits for the better after lockdown.

Robin, who runs the project alongside Birmingham-based Environmental Scientist Prof Francis Pope, hopes the video can shine a light on art’s revolutionary role in helping the climate.

The 39-year-old, who now lives and works in Belfast, said: “It’s great to highlight how you can help the environment and it’s really good to get a platform to raise awareness through our video.

“I think art and artists can have a role to create spaces and conversations and bring light to things that aren’t always fully teased out.

“That’s what the project is trying to achieve – to get people to stop, look and see something they haven’t done before.

“The project is a way of trying to raise consciousness around pollution – and that’s a key benefit.”

He added it was special to be singled out and receive recognition through the project and the video was a nice way of documenting how far we had come, what had been achieved and what needs to be done next.

Robin, who is originally from Bromsgrove, moved to Northern Ireland in 2006 to study a PhD in Composition and Creative Practice at Queen’s University Belfast after completing an undergraduate degree in Physics at Swansea University. 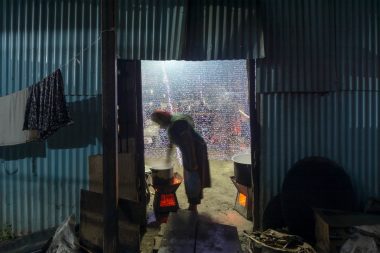 His research has taken him to both India and Ethiopia and he hailed National Lottery players for catalysing his career.

“I’ve received funding a number of times from The National Lottery, and it’s what has enabled my career as an artist.

“It’s so hard to get your first foot in the door, and getting the National Lottery funding makes a huge difference.

“It has allowed me to more sustainably run my career – so I’m enormously grateful to The National Lottery for that.”

The National Lottery has contributed more than £2.2bn towards green projects and initiatives across heritage, art, community and sport since 2010 – and TV naturalist and environmental campaigner Chris Packham is urging the public to be greener in light of its recent research.

The National Lottery has been encouraging the public to make a vital contribution to the future of our planet by making a #PlanetaryPromise on social media between Monday and today (Friday, April 23).

The #PlanetaryPromise is a chance for you to do your bit for the environment by making a conscious commitment to either start or stop something that could be helping or harming our planet.