PARENTS have been urged to educate their children about the dangers of inhaling nitrous oxide after an increase in the number of silver canisters being found across Bromsgrove district.

Insp Dave King from Bromsgrove Safer Neighbourhood Team (SNT) said: “We have been going into schools in a bid to get this very important message across to the children.

“But parents can help as well to reinforce how dangerous it is and look out for the signs of nitrous oxide abuse.”

The ‘laughing gas’ is a widely used party drug in the UK, making users feel euphoric and relaxed.

Bur the feelings are often short-lived so it is difficult to spot someone ‘under the influence’ parents may find the used canisters.

It was legal for a long time but following the introduction of the Psychoactive Substances Act in May 2016 means it is now illegal for businesses to supply or import it for human consumption.

In September last year we reported how officers in Rubery were working with their colleagues from West Midlands Police across the Birmingham border in a bid to combat the ever-increasing problem. 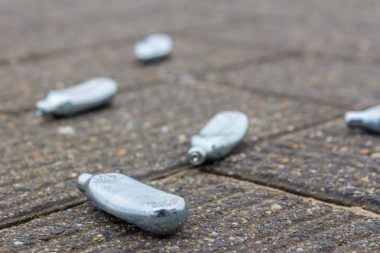 People taking it directly from the canister or cartridge can see their mouth and airways frozen, leading to wounds on the mouth, lips and vocal chords and damage to the lungs.

Taking too much can cause people to become faint or unconscious, numbness and difficulty walking.

Nitrous oxide can cause ear pain or, in serious cases, permanent memory loss, as well as vitamin B12 deficiencies, leading to neurological disorders.

And in the worse case scenario, nitrous oxide consumption can cause a lack of oxygen and death.