A SHORT socially-distanced flag raising ceremony was held in Bromsgrove this morning to mark the start of Armed Forces Week.

Bromsgrove District Council Chairman Coun Rod Laight raised the flag at the war monument at Crown Green (Crown Close) and the event (above) was broadcast live on the Standard’s Facebook page.

The annual ‘Fly the Flag for our Armed Forces’ ceremony was unable to formally take place last year due to the pandemic and this year, whilst the flag raising took place with a small number of invited guests, the extended Government restrictions meant that it could not be a public event as it would usually be. 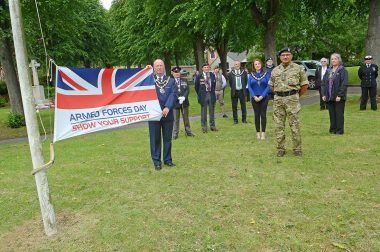 Bromsgrove Coming together to lend their support to the armed forces. Picture by Marcus Mingins 2521001MMR www.buyphotos247.com

Coun Laight said: “It is important that we mark Armed Forces Day with the flag raising to commemorate not only those who have given their lives but those who continue to protect us all. It is a symbol for the whole community, even if we cannot physically be together just yet.”

As the Armed Forces ceremony also falls on a ‘designated day’, in this case The Duke of Cambridge’s birthday, there will also be a Union Flag flown above the Parkside building.

Saturday marks the 13th Armed Forces Day and Bromsgrove District Council will once again fly the flag for the week leading up to it.

Patrick Smith, chairman of the Bromsgrove Royal British Legion, said: “It was a lovely turn-out and, although it had to be a bit different to previous events, we had a good turn-out.

“Just like Remembrance Sunday, it went very well and there was a good show of support, illustrating once again how much the town values the Armed Forces community.”