MORE than 70 firefighters battled a massive blaze at Kev’s Coaches in Bromsgrove which broke out around 10pm last night. 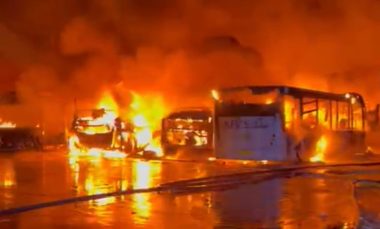 The flames ripped through the site, destroying 15 of the firm’s coaches.

A Hereford and Worcester Fire and Rescue crew from Bromsgrove arrived first on the scene and requested assistance, initially from West Midlands Fire Service which sent its crews from Northfield, Kings Norton and Woodgate.

Next to arrive were crews from Redditch, Wyre Forest and Kidderminster – the latter two to help with commanding the incident.

Specialist engines were also sent from Droitwich, Worcester, Evesham and a water carrier from Leominster. 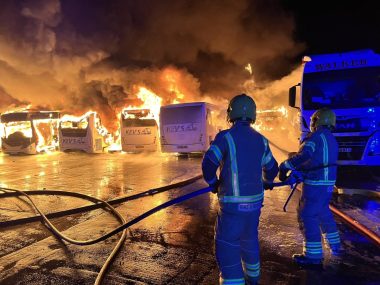 Fire investigators from Hereford and Worcester Fire and Rescue Service are looking into how the blaze started as the cause is currently unknown. An update on the investigation is available here.

The fire has been extinguished but a crew from Bromsgrove is remaining at the scene to damp down the site and make sure the flames do not reignite.

Kev Nind, who owns the business, said on Twitter: “Just wish to thank both West Midlands and Hereford and Worcester fire service for their professionalism in dealing with our very large and serious fire this evening.” 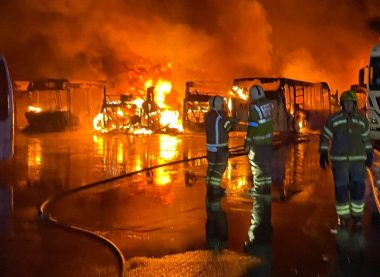 Due to the fire,  the following Kev’s Coaches services will not run today or Monday (they do not run on Sundays).

Service 19 – Maypole to Frankley via Northfield and Longbridge

Service 39A – Woodgate Valley to Longbridge via Northfield