VE Day 75 - When Bromsgrove came together, but two metres apart

PEOPLE across Bromsgrove district enjoyed street parties on their front gardens and driveways to mark the 75th anniversary of VE Day.

The Coronavirus lockdown meant public events had to be cancelled or postponed, including a £30,000 street party in the town centre which will now be held next May.

But residents did not let that dampen their spirits and, with the sun shining down, they made the most of the good weather.

At 10.55am there was a special Act of Remembrance at the war monument, organised by the Bromsgrove Royal British Legion, which was streamed live on our Facebook page.

More than 100 people watched it live and thousands more viewed it afterwards.

On May 8, 1945, the war in Europe ended. To commemorate the occasion – the 75th anniversary of VE Day – there is now a short Act of Remembrance, with Bromsgrove Royal British Legion, St John's Church and Town crier.

Posted by Bromsgrove Standard on Friday, 8 May 2020

Patrick Smith, the chairman of the Bromsgrove Royal British Legion, said: “We did our best for the community – it’s just a shame we could not have the public present as this town always turns out in abundance for its armed forces.

“The Act of Remembrance went very well – it was important it was still observed, even in these troubled times.”

He said: “This was not the VE Day celebration we had planned or expected but whatever the circumstances, we still remember and always will.

“When all the restrictions are lifted we are going to have one massive party.” 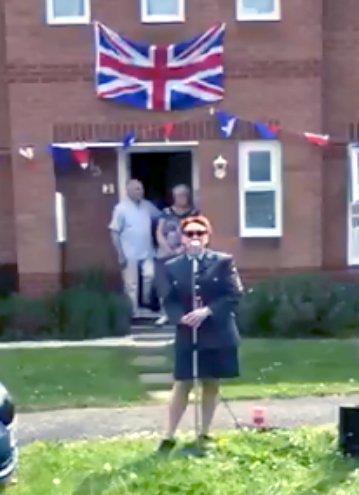 Then, throughout the day, there was entertainment on a specially designated ‘Party Like It’s 1945’ Facebook page, organised by Bromsgrove RBL and Jules Evans.

All the acts due to perform at the ‘biggest street party Bromsgrove had ever seen’ performed as part of that.

Photographer Geoff Hawkesworth projected a self-produced Vera Lynn film with archive footage from her in 1984 mixed with 1940s footage on the wall of his neighbours house.

People, all social distancing, came out to watch it.

By the end it had been shown a number of times after people’s requests to view it.

He said: “I couldn’t let the opportunity go without doing something to bring the community together.

“My first thoughts were just to play the music on a stereo, but how many people would actually stand on their doorsteps and sing loudly enough to sound good.

“Creating the film enabled people to sing under their breath subconsciously whilst enjoying the film.

“I reckon it, was probably 50 to 60 who came out, and I kept getting asked to repeat it.

“It looked great as it got darker, and so many people said it brought the estate together.

Posted by Geoff Hawkesworth on Saturday, 9 May 2020

The famous Bromsgrove Poppy Wall, first created to mark the centenary of the First World War returned with the words ‘VE Day 75’ on it.

It is made up of more than 18,000 hand-knitted poppies – predominantly red but also with some white ones for peace and purple ones to remember the animals which have lost their lives in conflict. 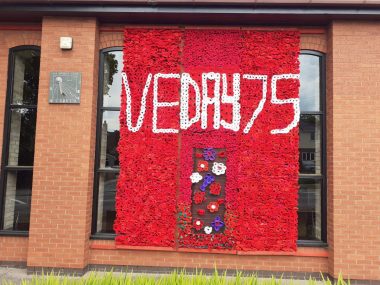 Keyworker children and staff dressed in red, white and blue and the school was decorated in flags and traditional bunting.

At 11am, the Union Flag was raised at the school’s flagpole and two minutes silence observed by the children and staff. 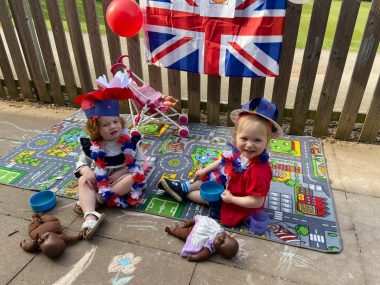 To commemorate VE Day, Mr Price from the estates department dressed in his re-enactment costume of the Corps of Military Police, circa 1942.

Miss Davis from the Prep School celebrated VE Day on her the front lawn. Her grandfather was a soldier from Malvern, her grandmother from Austria and they met during the occupation of the peace in Austria.

Pupils enjoyed meeting up with their friends and teachers for virtual tea parties. They had a Second World War singalong and gave a toast to the war veterans. 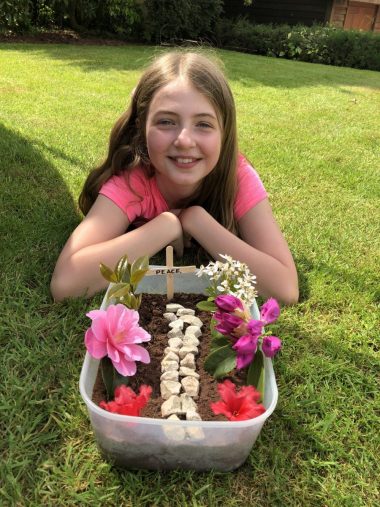 There were lots of VE decorations around the School and a tea party for the remaining boarders.

Pupils celebrating at home made delicious home-made scones and cakes and their own decorations for garden parties in the sunshine.

At Winterfold, in addition to baking and making decorations, the pupils were inspired by the headmistress Mrs Toms’ assembly and spent time making their own peace gardens.

There was a special VE Day 75 concert in aid of the Primrose Hospice, featuring town singer Cat Davis who had joined forces with North Bromsgrove High School for the fund-raiser.

🇬🇧VE Day celebration concert in aid of Primrose Hospice🇬🇧Cat Davis Singer and North Bromsgrove High School present a selection of songs from the 1940s to commemorate VE Day 🎤🎶🎵The concert was filmed to raise money for Primrose Hospice which continues to provide care and support to patients and bereaved families during the Covid-19 pandemic.Enjoy at home and, if you are able to, please leave a donation to Primrose💛

Posted by Primrose Hospice on Friday, 8 May 2020

At Brook Court, near the police and fire station, there was a clap for the armed forces at midday which the Bromsgrove police and fire crews joined in with, as the town’s blue light centre is nearby.

At the end of the day Rev Ray Khan performed a traditional Sunset Bugle Call to bring the curtain down on a memorable day for many across Bromsgrove and the rest of the country.

At the end of the day we still remember