TRIBUTES have been paid to community-minded Keith Shakespeare who organised the Stoke Prior Steam Rally for 30 years.

And this weekend, when the rally returns, there will be two RAF fly-pasts in memory of Keith, who passed away unexpectedly on July 17 at the age of 67 after suffering a blood clot on the lung.

Keith was born on July 2, 1952, to June and Doug Shakespeare in Bournville and referred to himself as a ‘Born villain’.

When he was young the family moved to Kings Norton where his sister still lives.

He attended Brandwood School in Kings Heath where he ran the tuck shop and was also in the chess club.

His boyhood family holidays were spent at Glan Y Mor campsite near Aberystwyth where the family had been going since the early 1930s with their great grandma.

It was a popular family gathering each year with aunts, uncles and cousins journeying from around the country to meet up for the holidays.

At home his love of model railways began with him preferring the Trix Twin 3 rail with Bakelite Track, in the 70s.

Due to his knowledge he was known as ‘Mr Trix’.

When sending in the track plan for his model layout at the various places he displayed they would often try to amend it as they could not believe amount of rails which could be operated.

Keith also had a lifelong passion for photography and joined the Kings Norton Photography Club which at that time was one of the most respected around.

He married Tracey in 1981 and the pair moved to Redditch before relocating to Stoke Prior in 1988.

In the mid 1980s he sold most of his collection to raise the deposit for his and Tracey’s first home.

Having rekindled his interest two-and-a-half years before, he had started his collection again and had done a new smaller scale layout which had been displayed for the last two years at the Easter Model and Collectors Show in Stoke Prior. He was also planning on going to other shows including one at Sunderland Flying Boat Museum, Pembroke Dock.

He joined the Standard Gauge Steam Trust, at Tysley to lay track, clean engines and general duties. It later became the Birmingham Railway Museum and Keith took over the museum shop.

Due to Sunday trading laws at the time they had to label everything as a ‘Souvenir of the Birmingham Railway Museum’ even the chocolate!

Keith helped with organising the Museum Open Days and when the man he was assisting died he took over and never stopped for 47 years.

Whilst at the Museum he got to take the outside stall to the newly starts Steam Rallys, which lead to him being head-hunted in 1981 to lead the sales for the National Traction Engine Club.

In 1984 the club became a Trust but could only sell traction engine related products so the NTEC (1984) Ltd to be able to sell other rally related items.

1984 also saw the birth of his only daughter Elizabeth or Liz as she’s now known.

Keith ran a model club at the museum and built a Dover to Calais layout in a Perspex tank, with two beach scenes either side, and water in between!

The trains ran fine but the coaches floated. They had to be drilled to let the water in and out and be weighted down.

One ‘clever cloggs’ said the engine must have been modified to run underwater, so Keith took a new one out of its box, took the body exposing the motor, put it on the track and ran it.

The man watching closely got a face full of water as Keith ever the tease knew it would. But Keith the visionary saw that it could lead to children trying to run one in the bath only did the layout for one year.

Everybody took extra care on April 1 as he was notorious for getting friends and family alike.

When sitting down to a meal with people who did not know him he would ask ‘who’s going to say Grace’?

Faces would drop, then someone would say just the word ‘Grace’ and the tension would break and everyone would enjoy the meal.

The Bromsgrove rally first started behind the Ewe and Lamb pub before moving to Astwood Bank and then Hanbury.

Becoming more and more popular each year it outgrew each venue until it found its long-term home in Stoke Prior.

Keith set up Shakespeare Rally Productions 20 years ago and was also a parish councillor for nine years, having being asked to take up a role on the authority because of his fantastic organisational skills.

Liz, who is now running the rally with her mum, told The Standard: “The reaction since dad passed away has been overwhelming – we announced it on Facebook and more than 15,000 people checked out the post from Cornwall to Scotland.

“Everybody was so shocked in the steam world when it happened.

“Dad never used to like asking for favours but people would always jump at the chance to be involved in what he was up to.”

His funeral at the Wyre Forest Crematorium was well-attended and raised £600 for the RNLI.

This weekend’s Stoke Prior Steam Rally

THERE will be a host of other attractions at the rally which opens at Little Intall Fields, Stoke Pound Lane, Off Hanbury Road, at 10am on both days.

Among them will be more than 700 exhibits, including full-size and miniature steam traction engines, fair organs, classic cars, motorbikes, tractors, commercial and military vehicles, stationary engines, model displays and collections. 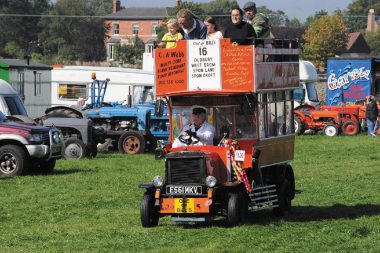 There will also be a fun dog show in aid of Birch Hill Dog Rescue at £1.00 ago and Dog and Duck displays.

On Saturday from 7.30pm there will be an evening with the World’s largest travelling Concert Organ – the 128-key ‘Victory’ which can play tunes from classics to modern pop and everything in between.

It will be playing simultaneous with the smaller 73-key organ ‘Locomotion’ (both organs are from Holland), alongside a video wall showing synchronised pictures. 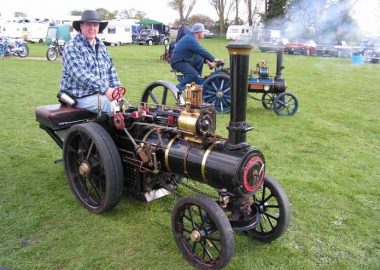 Clips will include wartime classics, comedies and the latest blockbusters.

There will also be displays by living history re-enactment groups ‘American West’ with Tepees, Indian culture, artefacts, craftwork and Dances from the Wild West as well as the Mid-Victorian Militia Society portraying the British Rifle Volunteers of the 1860s.

The fly-pasts by the Battle of Britain Memorial Flight will take place on both Saturday and Sunday afternoon (weather permitting).