THE TRAVELLERS who have set up an illegal encampment on the car park of the Bromsgrove Methodist Centre should be gone by the end of today, say police.

Insp Lee Page from Bromsgrove Police said officers went and spoke to the group earlier – where around six or seven vehicles remain – and were told by the travellers they intended to move on.

There were concerns about the camp because an event for residents to drop off items for Afghan refugees coming the the UK is due to take place on the car park tomorrow (Saturday) between 10am and 1pm and it was feared people may be deterred from donating.

Games for all ages are also sought.

The event has been organised by the B&DASS (Bromsgrove and District Asylum Seekers Support) group. Click here for more on the group via its Facebook page.

Click here for more information on tomorrow’s event or check out the flyer below. 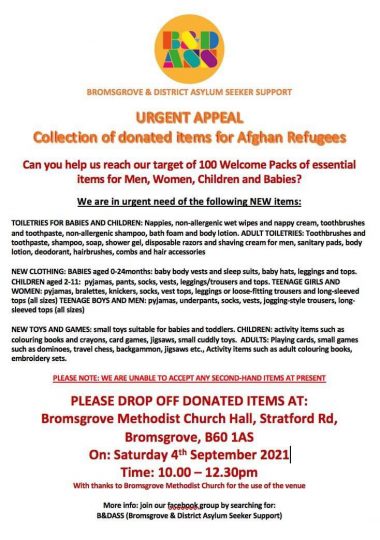