MEMBERS of Bromsgrove’s historic Court Leet and guests had the tough task of their annual ‘inner’ ale tasting on Wednesday night.

The group, dressed in their full robes and regalia and heralded by Bellman and Town Crier Kevin Ward, began their evening of tasting at The Queen’s Head in The Strand.

Once the ale was deemed fit and wholesome for the people of Bromsgrove, the licensee was presented with a certificate and a sprig of evergreen to hang above the doorway.

Dating back to medieval times when only a small section of the population could read, the sprig lets those who are illiterate the pub is a reputable venue serving quality ale.

After certifying the ale at The Queen’s Head, the group moved onto the Old Post Office – Bromsgrove’s newest pub which has been open just 12 weeks.

“It’s a new experience for me and I think it’s amazing.

“It’s great these traditions are being kept alive and I’m so proud our ale was given the thumbs up.”

Charlie worked previously for seven years behind the bar of The Queen’s Head and Julie then was her boss and landlady of the pub.

Bromsgrove Court Leet is conducting its annual 'inner town' ale tasting. This is the tasting in The Old Post Office – Bromsgrove's newest pub which opened 12 weeks ago

At the Red Lion, as well as the tasting, there was also a rendition of traditional folk song Landlord, accompanied by a ukulele player.

The lyrics were sung by several members of the Court taking solos, including Bromsgrove’s first female Bailiff Jo Slade.

And it led to plenty of merriment, cheering and chortles.

Red Lion landlord Jason Greenwood, who has run the pub for the last 11 years, said: “I grew up in the New Inn in Bournheath, my parents had a pub so the licensed scene in Bromsgrove is in my blood and the Court Leet ale tasting is part of that.”

The tasting concluded at the Conservative Club where Andrew Gardner from the Henley-in-Arden Court Leet was given the honour of sampling a pint of Bathams. 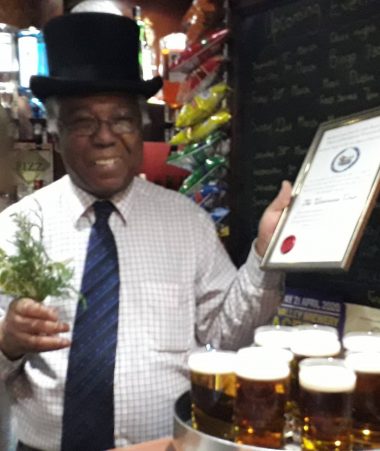 And, after a hard night’s tasting and testing, the Court and it’s guests headed up to the historic St John’s Church for a medieval banquet.