EXTINCTION Rebellion has come to Bromsgrove.

A small group of local Rebels posted letters to MP Sajid Javid and stood outside his office with banners on the day of Committee for Climate Change Interim Report to draw attention to the Government’s poor action record in the year since it announced a Climate Emergency.

We need our representatives to show the leadership and imagination necessary to commit to bold action and to carry out the duty of care they have been elected to perform on our behalf.

“We are on perilous ground. We are on track for a temperature rise of over three degrees Celsius. This would bring mass extinctions and large parts of the planet would be uninhabitable. 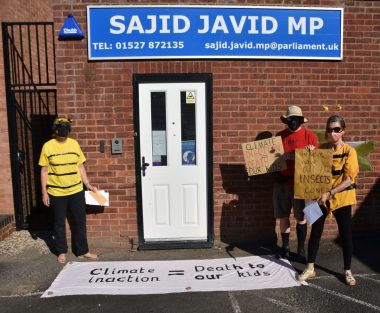 This year Covid has intervened and has reduced emissions to something like the annual level required. But now, in the recovery phase, we cannot go back to ‘business as usual’.

We need to put the brake on deadly greenhouse gas emissions and drive climate action, rapidly shifting away from our dependence on fossil fuels and replacing them with clean energy from water, wind and sun.

We must halt deforestation, restore degraded forests and change the way we farm.

The good news is that there is vast opportunity afforded by climate action.

Many of the benefits are economic.

“Climate action and socio-economic progress are mutually supportive, with gains of $26trillion dollars predicted by 2030 compared with business as usual.”(UN Secretary General).

My letter to Mr Javid speaks of the job creation potential of following an ambitious green recovery, but we must commit and throw everything we have at it.

What will your letter say?

We need you also to add your voice.

‘We need to stick together to beat virus and economic impact’

THE CURRENT Coronavirus crisis has forced us all to see how much we depend on vital public services, such as the NHS and social care providers, and on each other, in what has been an impressive show of community-based action.

However, there is a real danger that, as countries rightly take unilateral action to protect their citizens, we fail to see the bigger picture of the need for international co-operation. Like the climate emergency, this pandemic shows us in important ways no country is truly an island in such a situation, whatever our geography.

With a US President who seeks to blame international organisations rather than fund or support them, other national leaders, including our own Government, need to co-operate to offer direction and channel support to those most in need, wherever they are.

Gordon Brown, former Labour Prime Minister, has urged the need for a form of global government to tackle both the immediate medical emergency and the ensuing economic one, in the way he helped lead the international response to the 2008 financial crisis.

He stressed the need to include nations beyond the richer G20, who will potentially suffer most.

UN Secretary General Antonio Guterres has similarly said ‘we need solidarity, hope and political will to see this crisis through together’ with ‘a move from a country- by- country strategy to a co-ordinated global response, including helping countries that are less prepared to tackle the crisis.’

What would this involve? Certainly, in medical terms, it means supplies being sent to the crowded refugee camps in war-torn countries like Syria and Yemen and to the Palestinians trapped by the Israeli and Egyptian barricades in Gaza, where any outbreak of Covid 19 would claim countless lives.

In economic terms, it means ensuring Western-based corporations do not respond to a downturn by cancelling orders and laying off millions of workers in countries such as Bangladesh, Vietnam and Cambodia, who have little or no unemployment or social safety net.

More boldly, it means cancelling or postponing the massive debt repayments from poorer countries in Africa, Asia and elsewhere to the West, which exacerbate global inequality and prevent those countries emerging from poverty and supporting their citizens.

The current emergency needs to lead us and our Government to apply what we have learned about mutuality, and how supporting the most vulnerable in ultimately in all our interests, to international policy, as well as to our own public services and welfare system.

WITH Bromsgrove’s severe traffic and air pollution problems it is great news the county council has put together a bid for it to become the UK’s first ever all-electric bus town.

If successful the move will also make buses more commercially viable for operators and safeguard these lifeline services for users for years to come.

A district with less cars, cleaner air and more reliable public transport options will make it an even better place to be and visit.

We welcome your letters…..

What pressing issues do you feel need addressing in Bromsgrove, Droitwich, Rubery and South Birmingham? Send us your views to editor@bromsgrovestandard.co.uk