TWO 1920s Banshee motorcycles, both built in Bromsgrove, will be on display at the Norton Collection Museum for the next ten years says the British Motorcycle Charitable Trust.

At one time they were both owned by Dennis Norton, who started the museum’s collection in 1949, and are the only two of their kind in the country.

“I eventually decided to sell the bike so that I could afford to buy a Banshee Barrstrode 350cc Sleeve Valve Engine.

“Some years later I had a letter from the British Motorcycle Charitable Trust saying a Banshee 125cc was on show in a museum down south.”

Mr Norton was initially confused because he knew that type of motorcycle was extremely rare.

“After I rang up I realised it was my motorcycle – the one I sold all those years ago.”

The Trust has now agreed to loan the 125cc back to the Norton Collection Museum for the next decade.

“I originally wanted to buy the motorcycle back off the Trust, own it for one day, give it back to them, and then have it on display in the museum.

“I wanted to give the people of Bromsgrove a personal gift from me.

“It didn’t work out that way but I’m still very happy.”

Mr Norton believes there is no better home for the motorcycles than where they were originally made – here in the town.

And he said Bromsgrove MP and Home Secreatry Sajid Javid, who has made several donations to the museum in the past, agreed with him. 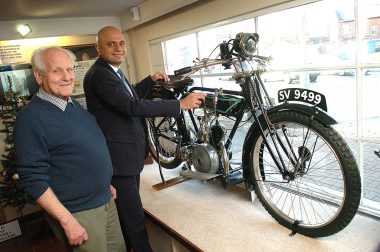 “Mr Javid came down last week to the see the motorcycles on Friday and he was really impressed.”