THE RSPCA is looking for a special person to open their heart and house to a blind Jack Russell terrier who needs to find his furever home.

Eight-year-old Chipper lost one eye and is blind in the other.

A member of the public contacted the RSPCA Newbrook Farm Animal Hospital in Frankley after having concerns about the dog’s welfare.

Inspectors rescued him and he had very sore eyes.

Vets recommended he had the right one removed.

He is currently recovering at an animal centre in Shropshire but staff are hoping to find him somewhere more permanent for him to spend the rest of his days.

“However, he’s adapted well and we’re now looking for a lovely new home with owners who can help to guide him through life. 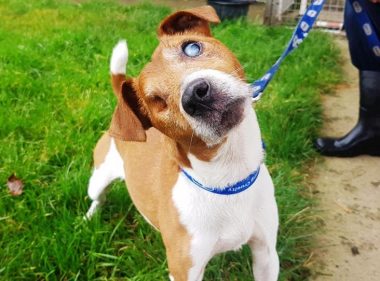 “Chipper is a happy little chappy. His blindness doesn’t stop him finding his way around – especially if it means getting some fuss and attention!”

RSPCA staff would like to find him a foster home to take him on initially with a view to adoption once he settles in.

Chipper would like to be the only pet in his new home and could live with older children.

Staff say he would really benefit from an owner who has experience with blind dogs and can give him the time he needs to find his way around and support him as he settles in.

Neil added: “To help Chipper we’d ask his new owners to keep things – such as furniture – in the same place so he can get his bearings and create a mental map of the layout of the home.

“This will really help him build his confidence at finding his way around independently and will avoid any unwanted injuries or accidental bumps!”

Chipper is happy being left home alone for short periods but really loves having company so would like a new owner who is around the house a lot of the time.

“Chipper is such a loving boy.

“He really does deserve a nice, quiet home where he’ll get lots of love and cuddles!”