A CAMPAIGN aiming to raise £81,000 for a Bromsgrove teenager’s spine operation has gained major traction over the last few weeks.

More than £50,000 has been donated to Amelia Hart who has just weeks before her condition – idiopathic scoliosis – becomes irreversible.

Without surgery the talented footballer, who has a severe curvature of the spine, will likely never kick a ball again.

Since the launch of campaign ‘Amelia Kicks Her Curves’ in October, the 15-year-old has appeared on Good Morning Britain, met her football idols and even had a Birmingham City LFC game dedicated to her.

Family and friends of the lifelong Blues fan have been relentless in their fundraising efforts, shaking their buckets everywhere they go.

“I went to see my GP after experiencing back pain but it took them a while before they got my diagnosis correct. 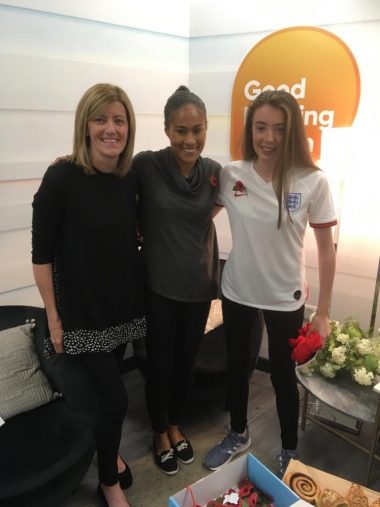 “It’s a painful condition but playing football is my dream so I just try to get through it.

“The thought of being able to carry on playing is what motivates me.”

Amelia will need 12 titanium screws during her tethering procedure and each one costs a staggering £3,000.

Her mum Lisa said: “We are appealing to businesses to sponsor one of her screws or part of a screw.

“It would be amazing if we could get gather the funds in what has to be the final push.”

If local businesses would like to sponsor one of Amelia’s screws you can email la.harty66@gmail.com for more information.