THE SKILLS of Bromsgrove’s Willows Hedgehog Rescue were enlisted to help a hog who, searching for water during the weekend dry spell, fell down an uncovered drain in Studley.

Rosie, one of the neighbours alerted Jayne from Willows on Friday and the hedgehog was still stuck on Saturday morning.

Jayne went along and house owner Arthur explained it was a storm drain, leading to a gutter 20inches away. 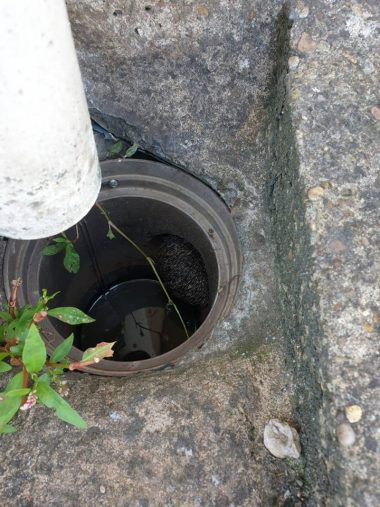 A variety of measures were used in a bid to entice the hedgehog out of its hole without success.

Another neighbour Gemma with daughter Aoife also came out to help.

Four hours later the fire service were called in.

As the crew from Alcester approached the hedgehog decided enough was enough and backed out of the hole on their own accord.

Jayne eased the creature out before it changed their mind.

Eventually Skew – as his now been called – was free and, after a much-needed bath is now recovering at Willows.

A number of residents had come out to view the rescue and were thrilled to hear Skew would be returned to his home town of Studley when he is well again.

Jayne said it was a great relief to get Skew free.

“With the announcement British hedgehogs are now officially vulnerable to extinction, it is important we do all we can to safeguard every single one.”

The research was conducted by the Mammal Society as part of its ‘Red List’ conservation report.

In 2016 hedgehogs were voted the UK’s favourite creature and in the 1950s there were an estimated 30million of them in England, Wales and Scotland.

The figure now is thought to have dropped to less than 1million.