A PIECE of England football history sold for more than £1,200 at auction.

The 18-carat gold and diamond England crest brooch was awarded to former FA Chairman Sir Bert Millichip when he left the Football Association in 1996.

Multiple bids were placed on the brooch, which has the famous three lions encrusted on it, with an Internet bidder eventually winning the item. 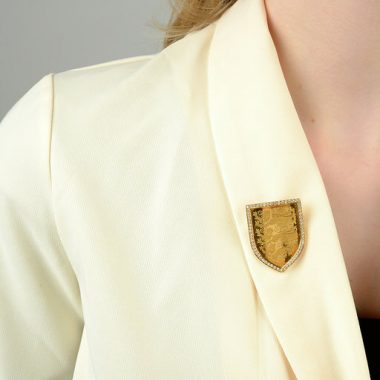 Sir Bert, who lived in Barnt Green with his wife Lady Barbara Millichip, oversaw drastic changes in English football, including the introduction of the Premier League.

He was also heavily involved in the appointment of Terry Venables as England manager.

The brooch was brought to Fellows Auctioneers by Sally Simmonds, daughter of Sir Bert and Lady Barbara on Thursday, January 30.

Alex Duffy, Fellows’ jewellery specialist, said: “After an online stand-off between bidders, it was fantastic to see the brooch sell so well.

“It’s always a pleasure to be able to offer unusual and unique items such as this for auction and watch enthusiasts and collectors fight it out.

“With its interesting provenance and sporting connections it’s unlikely we’ll see something quite like this come up again anytime soon.”