‘GET out into the high streets and support local businesses’ – that was the message from Labour’s Shadow Chancellor when she visited Northfield town centre earlier today.

Anneliese Dodds began her visit at Northfield’s Indoor Market where stores have been reopening over the past few weeks. 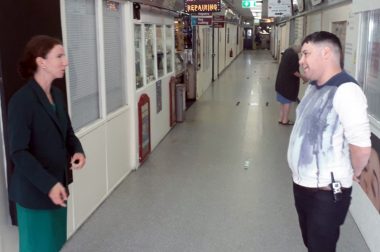 Mrs Dodds spoke to some of the business owners about the challenges they had faced over the past four months and the market manager Tom Corser.

He said: “It was good to have the Shadow Chancellor visit – she took a real interest in what is happening here.

“Going out shopping is an experience, you interact with people and can see what you are buying and we want to get that message across.

“I feel the Government should have allowed more businesses to open at once, rather than staggering.

“It meant we lost out on that ‘we are open’ feel.

“It has also led to a lot of confusion for shoppers who are not sure which stores are open and which ones aren’t.”

For example, the nail bar is able to open in the centre but the brow bar is not – primarily because of the face-to-face contact. 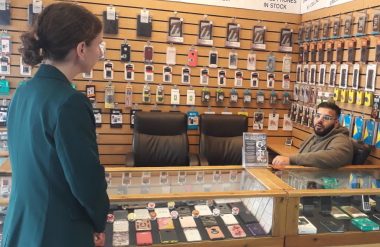 Zaf Saddiq explains some of the issues affecting his 20-year-old business. Picture by Tristan Harris.

Zaf Saddiq, who has ran his Elite Phones business for the past 20 years, said: “The first week was alright because of the backlog we had but it’s been quiet since.

“It is still very early stages and we will wait to see what happens.

“I want to thank my regular customers for all their support – they have been brilliant – sometimes if it is something simple with older customers I sort it out and don’t ask for anything but they often tip me anyway.

“Others bring me some lunch or a drink – the community spirit is fantastic.”

Colin Lillis has ran his Gem Unique – personalised gifts, greeting cards and bath bombs – for the past 15 months. 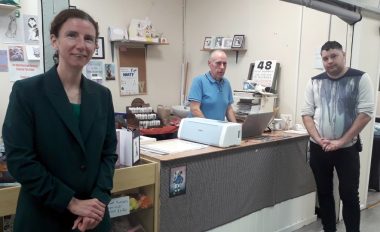 He said: “It came at a bad time for me as I had not been open a year so the support I could get was limited.

“I found a grant I could access but that was not until last week – it has been tough.”

He added it was all about increasing people’s confidence so they know they will be able to go out and shop safely.

Next up for Mrs Dodds was Cosy Coffee where she met manager John Quigley.

He had 12 members of staff and, after utilising the Coronavirus Job Retention Scheme, has now brought nine back.

He said: “The Government support has been good – without the furlough scheme we wouldn’t have survived. 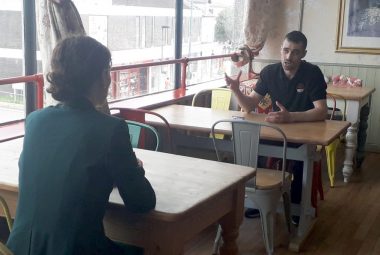 John Quigley from Cosy Coffee says he fears a second wave and without the furlough scheme his cafe would not have survived. Picture by Tristan Harris.

“It worked out well for us because of the three who have not returned, one found another part-time job, another went on maternity leave and it was the third one’s decision not to come back as well.

“So everyone who wanted to continue working here has been able to.”

He added his biggest fear was a second wave.

“If that happens when the furlough scheme stops and takings don’t increase, jobs will be lost.

“But a second wave is not inevitable – we need to all work together and keep things safe so it can be avoided.”

Another business owner in Cosy Coffee was tattooist Kat Douglas who owns Katwalk Ink in nearby Kings Norton.

She expressed disappointment and frustration it had taken so long for parlours to be able to reopen. 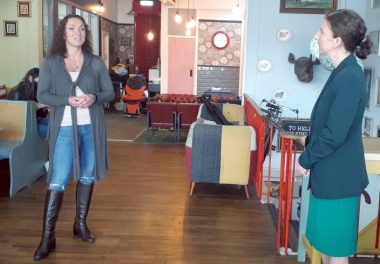 “We are the forgotten industry – we have been put in the same bracket as massage parlours and other close contact businesses but we are very different.

“Our industry is one of the most sterile around – it is a very clinical environment.

“We have always used PPE, even before the lockdown, and most tattoo parlours are more sterile than a lot of medical surgeries.

“We are less face-to-face than hairdressers, we have dealt with infection control for years and having a tattoo – for those who enjoy them – is good for people’s mental health.”

Kat received a grant which she said just about got her through and now she cannot wait to reopen and start inking again.

Chancellor Rishi Sunak has received a lot of credit during the lockdown for many of the schemes put in place to protect jobs but has stressed the furloughing cannot go on forever. This week he offered companies a £1,000-per-employee incentive for bringing staff back onto the regular payroll.

The visit also came 24 hours after some big high street names announced cuts – John Lewis revealed yesterday it was closing a number of stores, including its flagship Birmingham city centre shop in Grand Central while Boots announced it would be cutting 4,000 jobs across the country and closing a number of its opticians.

Mrs Dodds said, while a lot of what the Chancellor and Government had offered was good, she felt more could have been offered.

“I think a more targeted approach was needed – different packages to meet individual needs because without that we will see more unemployment.

“John Lewis was a big example but many other redundancies at smaller retailers could be on the way if the right action is not taken.”

She also criticised the furloughed and self-employed scheme coming to an end at the same time, saying she felt it should have been maintained for longer.

“These have been very challenging times, particularly for those involved in retail on high streets, hospitality and beauticians.

“Let’s make use of those high streets – they are the heart of our local communities.

“Those small businesses need our support and if we don’t use them we will lose them.”

Labour councillor Olly Armstrong said: “I was really pleased when Anneliese said she was coming to Northfield – she shows a great understanding and passion for the importance of all businesses – from freelancers to larger firms.

“Our view is, as part of the recovery from the virus, we should not just build back, we should build back better and improve the environment in the process.

“Myself and everyone on the BID (Buisness Improvement District group) have worked hard to make everything safe and we hope people will come back to Northfield to do their shopping.

“A lot of businesses were on the brink before the lockdown and rather than ‘levelling up’ we need to get them back to that point and then progress from there.

“You can’t beat human and emotional contact – our message to people is – get out on the high street to shop.

“Many people have discovered their local areas during the lockdown and we want that to continue.”

He said among his hopes for Northfield were more independent businesses and an outdoor market.

“Private landlords who own premises on Northfield High Street and Birmingham City Council need to do more to entice independent businesses here.

“There are still empty shops and it would be great if we could get some independent traders in there.

“Our indoor market is great but it would be nice to have an outdoor market as well – maybe on Price’s Square.

“It works well for other areas, like Moseley and Bromsgrove and would bring different people in who maybe have not been to Northfield before.”