Fire crews left the scene at approximately 3.20pm after their detection equipment highlighted nothing of concern following extensive checks.

A Sainsbury’s spokesperson said the customers’ safety was the supermarket’s highest priority and thanked customers and colleagues for their patience and understanding.

Two people were taken to hospital for checks and several others have been treated at the scene, following an incident at 9.50am.

More than 150 people were evacuated from the store and others from nearby buildings by police after several people suffered breathing difficulties.

The nearby college was not evacuated but staff have been told to keep all doors and windows shut.

Currently, seven patients have been assessed by paramedics after suffering minor respiratory problems.

Two women received treatment at the scene before being taken by ambulance, in a stable condition, to Birmingham’s Queen Elizabeth Hospital for further checks.

The remaining five patients were later discharged on scene.

A West Midlands Ambulance Service spokesperson said: “A number of other people at the scene, who were described as ‘worried but well’, received advice from the team of ambulance staff.

“This was a well-managed tri-service response which, together with the help from retail staff, saw the safe and speedy evacuation of a large number of people. Investigations into the cause of the incident continue.”

Anyone who has been in the vicinity of Sainsbury’s Longbridge this morning who have similar symptoms or feel unwell should seek medical attention. 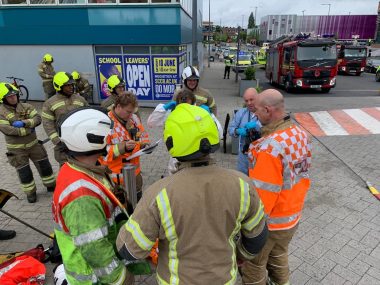 Two fire engines and brigade vehicle response vehicles from Northfield and Kings Norton Fire Stations are at the scene.

The first crew arrived three minutes after the call and the store had already been evacuated.

Specialist fire officers are using air monitoring equipment inside the store to try to establish the cause of the incident.

Fire crews are working closely with the store managers, the police and Birmingham City Council.

West Midlands Police have put a cordon in place and people are advised to avoid the area while the emergency services deal with the incident.