DANCING birds, close-up ants, undersides of fungi and sublime countryside were among the subjects in more than 400 images from over 80 photographers who submitted pictures for the annual Worcestershire Wildlife Trust calendar competition.

Judges said choosing the 12 winners of this year’s contest was harder than ever before.

Those selected will now get a copy of the fund-raising calendar featuring their images.

Each winning photograph features as an A4 image in the Trust’s 2022 calendar. A further 24 photographs by runners up feature as smaller inserts.

Wendy Carter, organiser of the competition, congratulated the winners and said: “We knew lockdown had given people the opportunity to spend more time noticing nature but we were overwhelmed with entries to this year’s competition.

“Our beautiful county is home to lots of fascinating wildlife and, as we discover every year, it’s also home to some very talented photographers who enjoy watching wildlife.

“Whether you’re watching wildlife in your garden, your local park or on a nature reserve, it’s always worth keeping a camera to hand – you never know what you might stumble across.

“Nature is there for us all.”

The overall winner of the competition, whose photograph appears on the front cover, was chosen by a public vote run promoted across the Trust’s social media channels in June.

Rebekah Nash, of Catshill in Bromsgrove, was delighted her picture of two great crested grebes performing a courtship dance at Arrow Valley Country Park, beat off stiff competition from three other images in order to win the coveted top prize.

She said: “I am absolutely thrilled to have been chosen as one of the twelve winning images to grace this year’s calendar.

“And to then be chosen as the overall winner, I am lost for words.”

Rebekah’s image has been chosen for March.

Prior to hers there is Trench Wood nature reserve by Gillian Smith (January) and Buzzard by Worcester’s David Meredith (February). 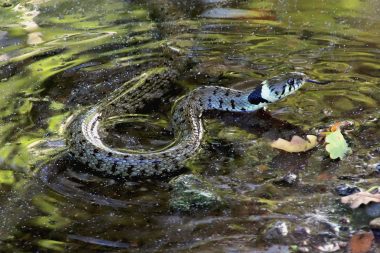 The calendar is available to buy from the Trust’s online shop – worcswildlifetrust.co.uk/shop – for £8 with all proceeds directly benefiting the Trust’s work to protect Worcestershire’s wildlife and wild places.

The calendar is available to buy from the Trust’s online shop and costs £8 www.worcswildlifetrust.co.uk/shop. All proceeds directly benefit the Trust’s work to protect Worcestershire’s wildlife and wild places.

What the winners had to say….

She said: “This photo was taken on a cold January afternoon with the last rays of a winter sun breaking through the trees in Trench Wood,

“I hope it captures the atmosphere of the scene.”

He said: “I’ve tried for some time to take an image of a buzzard in flight that captures the spirit and character of this magnificent bird.

“Eye contact was needed and, after many attempts, I was lucky to get this image of the buzzard looking straight into the lens.”

She said: “I’ve been watching grebe behaviour for years.

“The lake at Arrow Valley can spoil a shot, so I had to pick the right spot.

“Three hours I sat and watched them courting, then they both dived and this happened, magically right in front of me.”

He said: “I live on the edge of Menithwood.

“I was walking up through these beautiful woods to get a sunset photo and just happened to look back down the track and saw this.

“I walk up and down this track almost every day; this is the only time it has looked like this!”

He said: “I find photographing nature blends patience and experience with a good measure of serendipity.

“We don’t live near water so I was surprised when a mayfly appeared, presumably after hatching from a neighbour’s garden pond, as I finished washing my car.

“Memo to mayflies: If you only have one job to do and one day to live, don’t confuse shiny black cars for still water!”

He said: “Walking past one of the Hanbury ponds in late July 2020, you can imagine my surprise when this large grass snake suddenly swam up to the bank and poked its head out of the water just long enough for me to compose myself and capture a few images!”

“I was fascinated watching these tiny wood ants dashing over the little stems trying to get some honeydew from the aphids. This was taken by the pond at silly o’clock in the morning where you’ll often find me – I was searching for roosting damselflies but these tiny critters kept me busy for quite some time.”

He said: “Whilst walking early one morning I heard the distinct high-pitched squeaking of otters.

“I slowly crept towards the bank and couldn’t believe my luck, a family of otters were playing together.

“I witnessed one of the pups coming nose-to-nose with its mother and begin begging for food.

“It was a real privilege to see them – it’s certainly an encounter that I won’t forget anytime soon.”

She said: “An offering of a simple sunflower on a blazing summer’s day.

“Amidst the madness of the pandemic sat this bloom of tranquillity.

“As an amateur photographer, capturing this shot is a highlight of my artistic journey, so thank you to my wife for spotting it!”

He said: “Leaving my fog-bound home in Powick one October morning, I drove up the Wyche Road onto the Malvern Hills where I found this atmospheric view of lines of trees and a solitary church spire in the Severn Valley created by the rising sun as it slowly burnt off the fog.”

He said: “I went out on a cold, damp afternoon in November to find some fungi and I was delighted to find an abundance of species.

“This one was taken on my Olympus OMD-EM1 Mk111 and 60mm macro lens and, with the help of a little flash, I managed to get down to get this image.”

She said: “I love having guests come to my house.

“This snowy winter morning, what a welcome and lovely surprise to have as visitors a great tit and blackbird sharing from my cups as I looked on sipping my morning beverage.”