AN ALMOST festival atmosphere came to the town centre today as the organisers of ‘The biggest ever street party Bromsgrove has ever seen’ delivered exactly what they promised.

During the free ten-hour event for the town to come together to celebrate The Queen’s Platinum Jubilee, more than 1,000 visited. 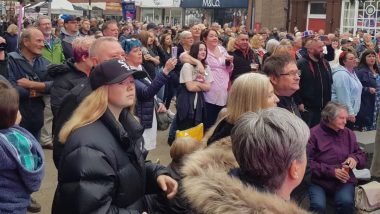 And the few hundred left at the end at 9.45pm would still be there now if given half the chance.

Even the weather played its part – despite Met Office warnings for heavy rain, high winds and thunderstorms, the predicted apocalyptic conditions stayed away and it was overcast but dry.

After the official opening by the Court Leet and the Royal British Legion, the party moved through the decades of the Queen’s 70-year reign as Great British pop culture and music was celebrated with performances from a variety of acts.

It began in the 1950s with Vintage Class singers and went through to the 2020s with other popular artists including Joe James Thomas, Vaseline, The Reflections, The Shaders and Skabucks. 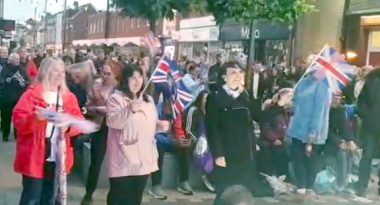 People of all ages came to join in with the party and the nearby High Street pubs’ takings will surely be boosted by the amount of drinks sold – the majority in plastic glasses so people could go out and dance to the live music.

The event climaxed with some Last Night of the Proms style numbers, including Rule Britannia and Land of Hope and Glory.

Because of the bad weather forecast, the Orchestra of St John’s performance was moved to St John’s Church and done separately.

There was three cheers for Her Majesty and her record-breaking reign led by Bromsgrove Town Crier Kevin Ward before everyone came together to sing the National Anthem and more flag-waving. 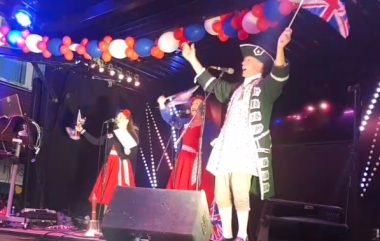 With it clear no-one was ready to leave, an impromptu performance of singalong classic Sweet Caroline was sang by Vintage Class and iconic party anthem Mr Brightside by the Killers became the last song of a memorable day and night.

Lead organiser Jules Evans apologised to anyone who came for the orchestra performance and missed it after we were forced to move it.

She told the Standard: “I want to say a big thank you to everyone who came out and supported us today.

“We promised Bromsgrove the biggest street party it has ever seen and this has exceeded my expectations.

“It was my dream to do this but also my nightmare when I saw the weather forecast last night and this morning.

“Thankfully the conditions were nowhere near as bad as predicted.

“We built this street party and stage and the people came.”

Funding was secured for the celebrations from Bromsgrove District Council and Greater Birmingham and Solihull LEP (GBSLEP) Recovery Through Creativity Grants.

The team enlisted Ian Livie and his team to put on the event.