DISRUPTION was caused across Bromsgrove district for most of the day as Storm Ciara hit.

At Hopwood, a tree came down on the A441, north of Junction 2 of the M42, blocking the carriageway.

A small tree fell in Packhorse Lane, Hollywood and lay across the road. 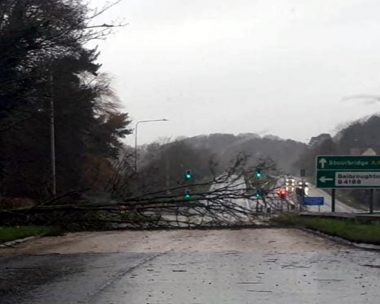 Worcestershire Highways crews dealt with a fallen tree on the A491 in Belbroughton which fell by The Bell pub and blocked the carriageway.

Trees also fell in Bromsgrove Road, Romsley, Money Lane, Romsley, just past the household recycling centre, on the Stourbridge Road, opposite Willowbrook Garden Centre, on Old Station Road, Bromsgrove, on Baccabox Lane, at the junction of Love Lane in Wythall and on Spirehouse Lane in Blackwell.

There was a nightmare for drivers on the A38 near Morrisons in Bromsgrove where floodwaters dislodged a manhole cover leaving a very dangerous hole in the road for motorists.

People are being urged to report any issues via the Worcestershire Highways Twitter page – https://twitter.com/WorcsTravel

There were a number of power cuts in several areas, including Hanbury, Bradley Green,

In Chaddesley Corbett, 49 homes around the A448 were left without power – electricity was restored by late afternoon.

Likewise, ten properties in Alvechurch and Rowney Green and 25 properties in Wythall, around Station Road, were left without electricity until mid-afternoon.

There are still power cuts in Belbroughton with 33 properties without electricity.

The electricity supply is expected to be restored by midnight.

Speed restrictions were placed on trains by Network Rail and by 2.30pm northbound Cross City Line services were all terminating at Birmingham New Street.

There were no trains between there and Lichfield for the rest of the day.

First Worcester warned passengers of delays to bus services because drivers were taking extra caution due to the weather conditions.

An Amber warning was put in place by the Met Office in place for heavy rain and high winds in Bromsgrove, Birmingham and the rest of the West Midlands from 5am to 5pm evening with winds of up to 60mph forecast.

An ‘Amber’ weather warning is the second highest behind red which shows the severity of the predicted storm.