POLICE used robotic means to get a vehicle out from an alleyway after a suspected disqualified driver dumped it there as he tried to evade officers. 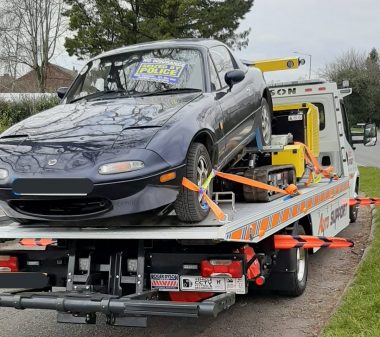 The pursuit began from Alvechurch where the motorist failed to stop for police and ended in the alley between houses on the Birmingham Road in Hopwood.

The man fled the scene, running off into fields.

But, with officers knowing who he is, he will be facing failing to stop and driving while disqualified charges.

The vehicle has been seized by police after they used the radio controlled ‘EasTract’ to recover the car from the alley.

The machine, which has caterpillar wheels, is halfway between a forklift truck and a tow truck.

PC Danny Fulford posted the video of the EasTract in action on Twitter.

PC Fulford said: “It just goes to show that even when suspects dump a vehicle down a small alleyway behind houses without keys and the the steering wheel locked, we can still get it out and seize it.

“As for the driver, we know who he is and he will be getting a date in court through the post.”