BROMSGROVE Police have said their ‘mini police officers’ which are being put outside schools to encourage people to drive and park safely have already been well-received.

Officers put the pint-sized officers outside Millfields First School on Tuesday and tweeted these pictures of parents and pupils showing their appreciation. 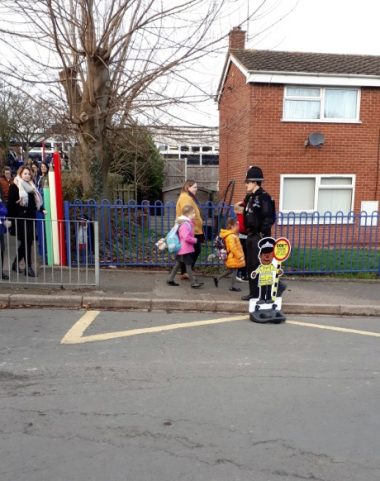 Parents and youngsters also enjoyed selfies with the quirky figures.

We reported earlier this week about the new recruits dedicated to warning drivers to slow down when passing schools or parking poorly outside schools have joined West Mercia Police.

The latest batch of recruits come in the form of metre-high cartoon police officers to stand outside schools warning passing drivers to slow down and not park on the zig-zag markings. 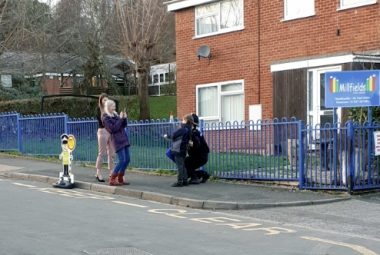 The ‘mini officers’ have already proved to be a great hit with schools in South Worcestershire after they were introduced last November as part of Police and Crime Commissioner John Campion’s joint campaign with Worcestershire County Council called Roads Focus.

Since then, the PCC has funded 40 more to be given to North Worcestershire, Herefordshire, Shropshire and Telford and Wrekin.

Officers will be placing the new signs outside those schools that have long suffered with speeding or parking problems.

PCC Campion said: “These new signs are fantastic and were so well received by schools in South Worcestershire that I wanted to offer the same to local policing areas across West Mercia.

“I hope that these ‘mini officers’ will remind motorists to be more considerate outside schools. All too often people don’t respect the speed limits or think about where they are parking. By using these signs in a sporadic way, we hope they will be even more effective.”