‘OUTGOING’ is the perfect word to describe a Rubery toddler who has walked more than 45 miles around his local area during the lockdown to raise £340 for Acorns Children’s Hospice.

Macauley Walker-Breen has been doing his bit during lockdown to support the charity and help fund its work caring for children and families.

The 22-month-old and his mum Abbie set out to walk 20 miles throughout June to raise £200 but ten days into the challenge the pair had smashed both the distance and their fund-raising target.

The duo continued their daily strolls and the funds have kept rolling in. 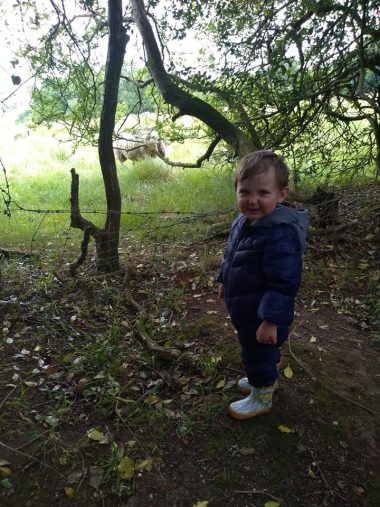 Abbie, who is 29, said: “Macauley has absolutely loved it – it’s not me dragging him out the house.

“He’s got such a happy bubbly character, he just loves being out and running around.

“We’ve been going out as far as he can each day and having a little picnic.

She added Acorns being a children’s charity really struck a chord with Macauley.

“He knows he’s been walking to raise money and that the money is to help children.”

Abbie and her family are big supporters of Acorns, holding regular fund-raisers for the cause.

Every year Abbie’s brother Darren asks friends and family for donations to Acorns in lieu of presents.

Darren has Asperger’s and gets really passionate about certain things, one of them being Acorns. 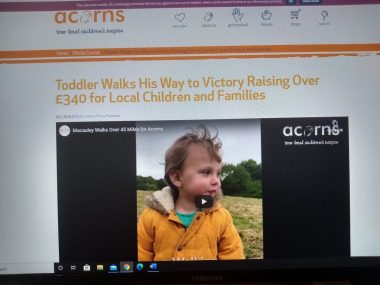 Acorns’ fund-raising officer Izzie Goodwin said: “Macauley is one of the youngest and most adorable fund-raisers we have, which just goes to show it’s never too early to start supporting Acorns.

“It’s wonderful to see how much he’s been into the challenge and we’re thrilled to hear he beat both his target distance and fund-raising amount.”

The cash he has raised will go directly to local children and families who rely on Acorns’ support.

Despite the pandemic the charity is continuing to provide emergency and end of life hospice care, as well as well as emotional and practical support to hundreds of families who are in strict isolation at home.