THE HEADTEACHER of North Bromsgrove High School Angelina Robin-Jones has given notice to leave at the end of the academic year.

The pupils will be given the news in a special assembly today and a letter is being sent home to parents this evening.

In the statement to parents and carers, released to The Standard, Elaine James, the Chair of Governors said: “Due to personal and health reasons, Mrs Robin-Jones will not be in school for the next few weeks and has given her notice to leave NBHS at the end of the academic year. We wish her well for the future.”

It added that deputy headteacher Adam Smith would take over the leadership for the remainder of the term.

But, around Easter, Mr Smith successfully obtained a new post which he is due to start in September so will be unable to take on the role full-time.

“We are working closely with the Local Authority to secure leadership for NBHS for the new academic year.

“We are pleased to say that we have successfully recruited to fill a number of vacancies recently and we are confident that the school will be fully staffed for September.”

We reported on our front page on May 18 about concerns expressed by parents following the resignation of seven teachers from the maths department which followed nine others leaving their posts at Christmas. 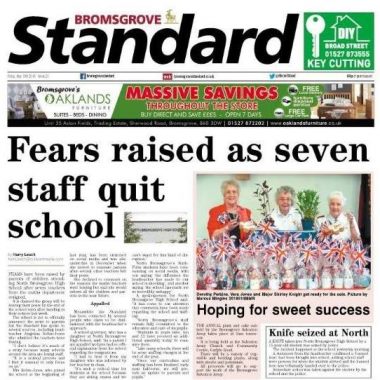 Ofsted carried out an inspection at the school on May 23 and 24 and the inspectors’ findings are yet to be released.

“As is the normal practice, the judgement is only announced once the report is issued.

We are currently awaiting the report from Ofsted. Parents will be advised as soon as it is available,” the statement added.