AN APPEAL has been launched to find a new leader for the 1st Barnt Green Scout group.

The group, which started in 1932 (Cubs started in 1929), is also seeking a chairman and secretary to help behind the scenes.

The scout leader would be needed for the two hours every Monday night during term-time, plus two to three hours-a-week for planning and administration – although that would be shared across multiple leaders if there was more than one.

Leaders also go on camps and other trips and activities.

Full training will be given to leaders and the role is very rewarding.

Leaders empower children to have fun, make memories and feel good about themselves, learning life skills along the way.

As well as the Scouts, the group’s Cubs and Beavers have also been busy this week planting out 30 trees to be part of The Queen’s Green Canopy. 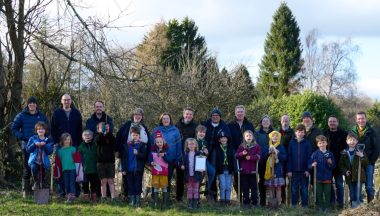 The children’s work was part of the larger picture which, to celebrate the Queen’s Platinum Jubilee, will see 70 ancient trees and 70 ancient woodlands to Her Majesty as she celebrates 70 years on the throne.

Queen Elizabeth’s recent anniversary on February 6 was a length unmatched by any other British monarch.

A spokesperson for the group said: “It was a damp but fine day for the event and 30 Cubs and Beavers were helped by leaders, parents, allotment volunteers and family members to plant their trees.”

There was also a fun tree quiz, and refreshments for everyone.

Anyone who could help the group by becoming a leader for the Scouts should email info@bromsgrovescouts.org for more.