BROMSGROVE MP Sajid Javid hailed the Conservative victories in the Worcestershire County Council and, specifically, in the district’s divisions.

Speaking to the Standard he said: “This has been a great set of results for the Bromsgrove Conservatives.

“I want to congratulate all of the councillors who have retained their seats, and the new Conservative councillors in Alvechurch and Beacon.”

“In overwhelming numbers, residents have supported the Conservatives plan to build back better from Covid-19 and deliver on the people’s priorities.

“That important work starts now, and I look forward to working with my new colleagues to make Bromsgrove District and the County an even better place to live, work and raise family.” 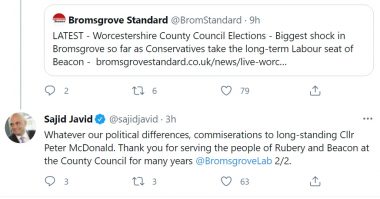 In a Tweet he wrote: “Whatever our political differences, commiserations to long-standing Coun Peter McDonald.

“Thank you for serving the people of Rubery and Beacon at the County Council for many years.”

Coun McDonald, also a district councillor in Rubery, had been a long-term holder of the Beacon seat which is not believed to have ever been a Conservative seat before.

Conservative Aled Luckman took Alvechurch from the Independents and the only ever party change happened when the Liberal Democrats’ Joshua Robinson took Bromsgrove Central from the Conservatives.

Overall in Bromsgrove, the Conservatives won seven seats – gaining two and losing one – with the Liberal Democrats gaining one and Labour’s Luke Mallett holding onto his seat.

Across the whole of Worcestershire County Council, the Conservatives gained five and now hold 45 of the 57 seats.

Labour are on three, having lost seven across the county, the Liberal Democrats are up one to four seats overall, the Green Party also gained one and now has three Worcestershire County Councillors and there are two Independent members.

Click here for all the results in full from the Bromsgrove divisions and see how the drama unfolded – including videos of the declarations and pictures at the count.