A CROWD gathered in Sanders Park for a #StopTheCoup protest at Sanders Park in Bromsgrove on Sunday following the Government’s decision last week to prorogue Parliament.

Protesters circled the park before listening to speeches from Bromsgrove’s anti-Brexit campaigner Femi Oluwole from Our Future Our Choice, consultant neurologist David Nicholl, Stuart Thomson, chair of both Worcestershire for Europe and Veterans for Europe and Parliamentary candidate for Worcester Stephen Kearney.

Organiser Stuart Thompson said: “Bromsgrove had to be heard – Parliament is sovereign and prorogation means the removal of people’s voice. “At this time of constitutional crisis we need more time for debate, not less.

“This is a dictatorship and neither Bromsgrove nor the rest of the British people will tolerate this.

“The people have really come together and said #StopTheCoup.” 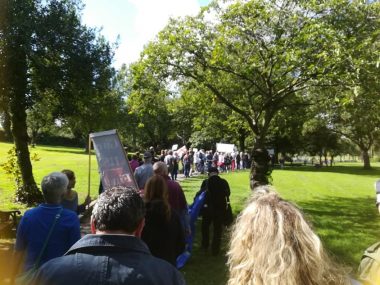 Mr Nicholl talked about the risks to the NHS he felt a no-deal Brexit would pose.

Bromsgrove resident Sam Evans, 21, said: “Today’s protest was not about whether people voted leave or remain in 2016.

“It was about standing up for Parliamentary democracy and standing against the hard right tactics of Boris Johnson and his unelected advisor Dominic Cummings.”

Responding to proroguing of Parliament, Bromsgrove MP and Chancellor of the Exchequer Sajid Javid said: “We are currently in the longest Parliamentary session in almost 400 years and it’s crucial that we put a bold and ambitious domestic

programme to MPs so that we can deliver on people’s priorities across the country.

“To do this we need a Queen’s Speech.

“This is about providing Parliament with a new legislative programme that will help the NHS, fight crime, invest in infrastructure and cut the cost of living.

“As we have said previously, prorogation to suspend Parliament, to block MPs further consideration of Brexit is not something we support.

“MPs will sit next week, the week after, the week before EU Council, and two weeks after.

“Not only that, but the Government will put its entire domestic agenda, and inevitably its approach to Brexit, to the vote as part of the Queen’s Speech, with major votes on Monday and Tuesday, October 21 and 22.”