FAST FOOD giant McDonald’s has amended its plans for a Drive-Thru in Bromsgrove and resubmitted its proposals to the district council.

Residents have until December 28 to have their say on the revised plans for the area between Stourbridge Road and Birmingham Road.

Back in January, after the original proposal was put forward, a public meeting was held at Bromsgrove Sporting’s Victoria Ground and was attended by more than 80 people.

A further public meeting was held on December 16.

Among the fears expressed were increased traffic on the Stourbridge Road and the Birmingham Road and the fact the fast food outlet was ‘within walking distance of three schools attended by more than 1,600 pupils’.

Campaigners said the headteachers of two of the schools had voiced their opposition to the McDonald’s.

And those gathered expressed concerns about it being in a conservation area, in between the historic Parkside building, Devenal House and the Norton Collection Museum and next to the James Giles and Son Funeral Directors which had been in the town for more than a century. There were also concerns about the loss of town centre car parking.

Yesterday the time to determine the application was due to expire but an extension has been given by the council until March 19, 2019.

Last Tuesday, a week before the deadline, 14 new planning documents were submitted to the council – eight ‘planning’ documents and six supporting ones. 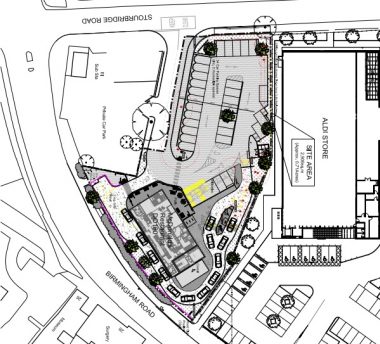 The revised application details a two-storey McDonald’s restaurant with car parking, store and side-by-side drive-thru lane, with two order points, canopies and an outside patio area with a children’s play area.

The supporting statements claim the building being sited at the north of the site would ‘respect the heritage’ nearby, adding the revised scheme ‘addressed the concerns of the conservation officer with regard to the Grade II listed building’ (The Council House, Parkside).

ADL Traffic and Highways Engineering Ltd, acting on behalf of McDonald’s, said it produced the supporting traffic reports using data from other similar existing sites to predict what would happen in Bromsgrove.

On the loss of town centre car park, the report said the plans would still leave 975 existing public car parking spaces in Bromsgrove within 500m walking distance of the town centre.

The report said planning permission could be refused if the fast food outlet fell within 400m of the boundary of a first, middle or high school or 400m within a park or youth centre facility but this one did neither.

The ADL report claimed the restaurant would provide a local McDonald’s for the town as the next nearest ones – in Droitwich and Longbridge – were 4.2miles and 4.7miles away respectively.

But one resident who has commented on the new application said the amended plans did not address people’s concerns.

“It doesn’t matter what amendments they make to the building or road, the location of the proposed McDonald’s would cause mess and chaos to the area.

“Added traffic and rubbish that would undoubtedly be thrown on the ground.”

Residents and interested parties have until December 28 to have their say on the resubmitted application.