THE MULTI-STOREY car park in Longbridge has provided Zumba instructor Ellie Hooper with a quirky, under-cover, socially-distanced space for her to start her popular classes again. 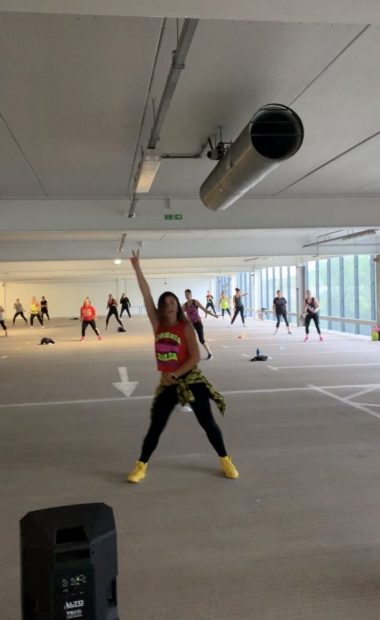 Before the lockdown Ellie led sessions in Rubery, Bromsgrove and Longbridge, along with four classes in the community and two in gyms.

Once the restrictions were introduced she could no longer run them in person so screened them on Zoom.

Ellie, from Rubery, said: “People joined me from all over the world, which was great, but it was not the same as teaching a face-to-face class.”

Ellie knew classes would soon be allowed back but needed to think of a way of keeping them socially distanced – preferably outdoors – but then also how they could fit in with the unpredictable British weather.

“So, after having an idea about a multi-storey car park, I wrote to Longbridge Shopping Centre on a big long shot about using their facilities.

“I knew this could be the perfect location for classes as this would mean the classes would be outside but undercover.”

Ellie set up a meeting with the bosses there and explained her plans and ideas and they then arranged for her to have a space on the car park.

On the quietest level, they blocked off an area for the classes to be taught.

Ellie originally planned two sessions-a-week but they became fully-booked within the first few hours of release, so she added another two.

The classes now take place every Monday and Wednesday – at 6.30pm and 7.30pm each evening.

She added: “The community are loving it and I am getting lots of members returning from my classes and also new members joining me from all over Birmingham.”

Ellie said: “I was eager to get these classes running and to get the community back to fitness, and back to some form of normality.

“Zumba is a great way to workout and also has a massive impact on improving peoples health both physically and mentally.

“Being able to be back out teaching people face-to-face has been amazing and I have had so many people come to me and say how much it has made them feel better mentally and physically for getting back to some kind of normal.”